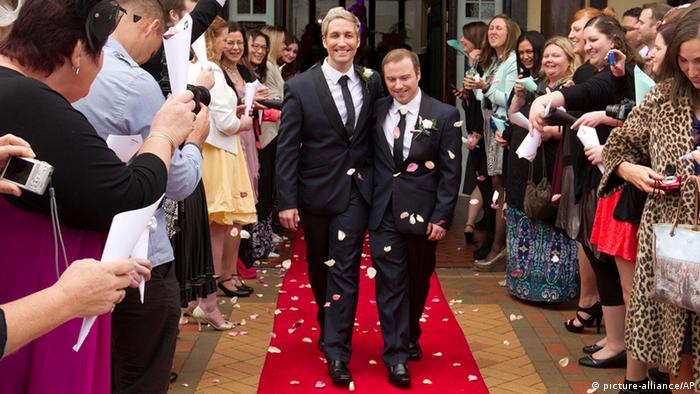 The New Zealand parliament on Tuesday night unanimously passed a bill that is expected to allow about 1,000 men to apply to have past convictions for homosexual activity removed from their criminal records.

Homosexuality was decriminalized in New Zealand in 1986, but men who were convicted before that date still have the convictions on their records.

Under the new law, family members will also be able to apply to have the criminal records of a deceased relative cleared.

"I would like to apologize again to all the men and members of the rainbow community who have been affected by the prejudice, stigma and other negative effects caused by convictions for historical homosexual offences," Justice Minister Andrew Little said.

"This bill sends a clear signal that discrimination against gay people is no longer acceptable, and that we are committed to putting right wrongs from the past," Little said.

The convictions that can be erased relate to three offences that were removed in 1986 — sodomy, indecency between males and keeping a place of resort for homosexual acts, and two from 1908 involving "unnatural offences" committed with another male.

Applicants would have to show that, on the balance of probabilities, the sexual conduct they were convicted of is no longer illegal, which will generally involve an assessment of whether the activity was consensual and involved adults over the age of 16.

The bill was first introduced under the former National-led government in July 2017 by then-Justice Minister Amy Adams, who apologized to New Zealand men who had been convicted for homosexual acts.

New Zealand passed laws banning discrimination against gay people in 1993, and in 2013 it became the first country in the Asia-Pacific region to legalize same-sex marriage.

The new legislation follows in the footsteps of the United Kingdom, which last year enacted "Turing's Law," providing a blanket posthumous pardon to some 50,000 men who were convicted under old laws in the UK. Under the law, named after mathematician and World War II code breaker Alan Turing, people still alive with past convictions could also apply to have them quashed.

Turing received a posthumous pardon from Queen Elizabeth II in 2013 for a 1952 conviction involving gross indecency with a 19-year-old man, which led to calls for the blanket pardon for other men.

While Turing did not go to prison, he was chemically castrated and died of cyanide poisoning in what was determined to be a suicide two years later. Turing and renowned writer Oscar Wilde are arguably the most famous people to be convicted of homosexual acts in the UK; Wilde was imprisoned for two years and left jail in poor health, dying within a few years of his release.

Read more: Marriage for all: Celebrities tying the same-sex knot

The Australian states of New South Wales, Victoria and South Australia have also quashed historical convictions for homosexual activity, and in 2017, Germany erased the convictions of 50,000 gay men who were convicted under a Nazi-era law, and also offered financial compensation to some survivors.

The 99-year-old German activist Wolfgang Lauinger, imprisoned for being gay in both Nazi Germany and post-war West Germany, has died. He was never rehabilitated for falling victim to Germany's anti-gay law Paragraph 175. (22.12.2017)

Australian gays say 'I do' as marriage reform kicks in