New Zealand will lift restrictions now that the last-known COVID-19 patient has recovered. Prime Minister Ardern said although transmission of the virus has been "eliminated," it will take work to keep it that way. 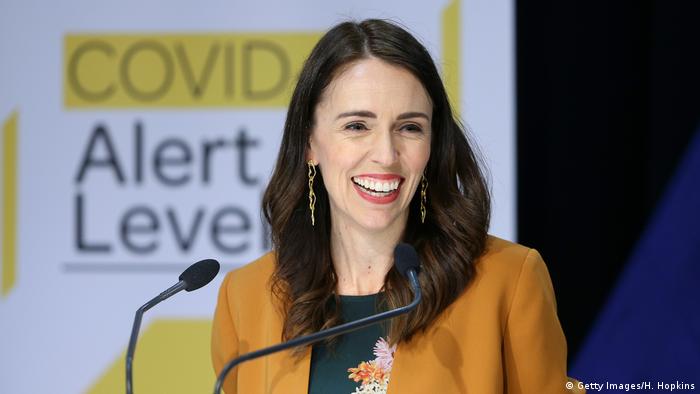 New Zealand declared no known active COVID-19 cases on Monday, with the country due to relax nearly all of its coronavirus restrictions.

A statement from the Ministry of Health said the last remaining case, a woman from Auckland, has now been symptom-free for 48 hours and is regarded as recovered.

Director-General of Health Ashley Bloomfield said the patient was now able to leave isolation and that having no active cases for the first time since February was "a significant mark in our journey."

It's been 17 days since New Zealand's last new case was reported, while 40,000 people have been tested in that time.

The country's strict border restrictions will remain in place, including managed isolation and quarantine for travelers.

But the rest of the country's coronavirus measures will be lifted by midnight on Monday (1200 UTC) — meaning that public and private events can resume without curbs while the retain and hospitality industries can operate without social distancing measures.

New Zealand Rugby (NZR) said that fans will once again be allowed into stadiums this weekend for the start of the country's domestic rugby union competition.

Stamping out virus is 'sustained effort'

Prime Minister Ardern celebrated the milestone, but also urged caution and patience in the months ahead.

"We are confident we have eliminated transmission of the virus in New Zealand for now, but elimination is not a point in time, it is a sustained effort," she said at a press conference.

Ardern added that New Zealand "will almost certainly see cases here again, and that is not a sign that we have failed, it is a reality of this virus."

New Zealand has reported a total of 1,504 confirmed and probably COVID-19 cases and 22 deaths.

New Zealand health officials had been briefed in 2018 on the 1918 Spanish Flu pandemic, when an estimated 9,000 residents died among its then-population of just over one million as World War One troops were shipped home.

Since 2010, New Zealand's Ministry of Health has had a pandemic plan, revised in 2017, with special credits to retired medical historian Professor Geoffrey Rice, author of books on the Spanish Flu.

The remote agricultural exporting island nation has post-war conducted biological screening to prevent arrivals of livestock diseases from abroad, fearing its primary industry would be crippled.

The United Kingdom has started quarantine measures for new arrivals, and New Zealand said its final COVID-19 patient has recovered and the country will lift most restrictions. Follow DW for the latest. (08.06.2020)

New Zealanders have emerged from lockdown with no new infections in three days. But the isolated nation's health chief has warned of a second coronavirus wave heading into the South Pacific winter. (14.05.2020)

Auckland will illuminate Sky Tower in the colors of the German flag in recognition of the final repatriation flight. Some 12,000 Germans were stuck in the country due to the lockdown measures. (13.04.2020)