For days now, thousands of Chinese have taken to the streets to speak out against the Japanese government's purchase of contested islands. Observers say there are other reasons involved as well. 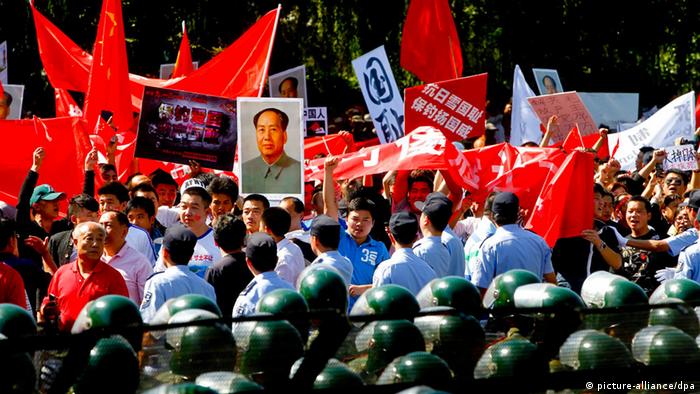 On the anniversary of the Japanese invasion of China, people in China took to the streets once again to voice their view of the spat between Beijing and Tokyo over islands in the East China Sea.

The rocky, uninhabited outcrops, known in Japanese the Senkaku and in Chinese as the Diaoyu islands - have been contested between the two countries for decades. Taiwan also claims ownership over them.

The Japanese government recently bought three of the islands from a private owner. The purchase triggered a wave of protest in China - according to Chinese media, demonstrations have been held in over 80 cities. There have been attacks on Japanese cars, restaurants and businesses. The Japanese government put out a warning for its citizens living in China. A number of Japanese concerns, among them Canon, Panasonic and Toyota have closed their factories in China for the time being.

On Tuesday (September 18) over one thousand demonstrators gathered in front of the Japanese embassy in Beijing. September 18 also happens to be a historic day for both: It is the anniversary of the so-called Mukden incident. On that day in the year 1931 Japan attacked the northeast of China and started a long occupation of Manchuria. Unofficially, the day became known in China as the "Day of National Disgrace." 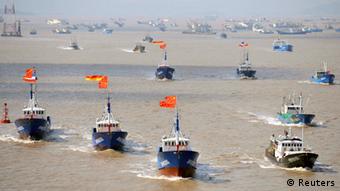 China and Japan sent out boats to patrol the contested area

One protest, many motives

On the 81th anniversary of the incident, Chinese protesters took to the streets not only to demonstrate against their suffering under Japanese occupation and the spat over the Senkaku / Diaoyu Islands, but also against national issues, such as corruption and freedom. Yang Jisheng, professor for communication and media science and former editor at the state news agency Xinhua, said this was a dilemma for the Chinese government.

"The government in Beijing can not prohibit such protests because for patriotic demonstrators, it would be a sign of weakness. On the other hand, the government cannot leave the protesters completely to their own devices because it could get out of hand," Yang told DW.

Chinese citizens did not often get the chance to picket publicly - one reason the occasion was being used to voice disapproval over current problems, he added.

It is said that in order to keep control over the demonstrations, the Chinese government has organized the demonstrations in front of Japanese institutions. Some of the protesters told the news agency AFP that transportation via tour busses had even been organized by Chinese authorities. Liu Xiaoyuan, a Chinese lawyer, has observed the demonstrations outside of the Japanese embassy in Beijing. He doubts that the event was "self-organized and spontaneous," contrary to what was reported in Chinese media.

He added that demonstrations carried out in the name of patriotism were very welcome by Beijing for a number of reasons: 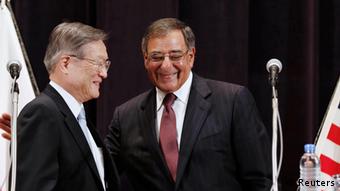 Leon Panetta went to Tokyo before travelling to Beijing

"If the people concentrate on the island spat between China and Japan, it means they are not concentrating on other national problems."

He said it was unlikely that it was a coincidence that court proceedings for the ex-police chief Wang Lijun - who earlier this year escaped to the US consulate and shed light a string of scandals involving former top politician Bo Xilai - are taking place on the anniversary of the Mukden Incident, said Liu.

USDefense Secretary Leon Panetta starts his visit to China on September 18th as well. The escalated spat over islands in the East China Sea is expected to be on the agenda for talks.

A day previous to his China tour, he was in Tokyo for talks as well, right after China and Japan sent out ships to patrol the contested area. He urged both sides to exercise restraint.

The US government seeks neutrality in the spat between China and Japan. At the same time, Washington has promised to uphold treaty obligations with Tokyo. The newspaper and party mouthpiece Renmin Ribao criticized the US for its "hypocrisy" in dealing with the issue.

On Monday (September 17th) a commentary published in the Renmin Ribao warned Japan to not further "provoke" China and threatened to impose sanctions. It said the Japanese economy could suffer for up to 20 years if sanctions were imposed.

The dispute over islands in the East China Sea has seen both Tokyo and Beijing bow to nationalist sentiment. There are hopes that both governments will seek to ease the pressure before the tension boils over. (18.09.2012)

In China people take to the streets again to protest Japan's purchase of three disputed islands. (18.09.2012)

Anti-Japan protests have broken out across China, with thousands of people mobbing the Japanese embassy in Beijing. Tensions between the two countries have risen over a disputed chain of islands in the East China Sea. (15.09.2012)

East China Sea is hit by a wave of nationalism

Rising nationalism in China and Japan is fueling the dispute between China and Japan over a string of islands in the East China Sea, experts say. Yet most expect the two economic powers to resolve their differences. (11.09.2012)

Tokyo is showing an increasing willingness to play a larger role in global security issues as it seeks support from Europe for its own most pressing concern — an increasingly influential and expansionist Beijing.