A bus full of civilians was destroyed when the Saudi–led coalition targeted Houthi rebels in Yemen's port city of Hodeida. The latest bombing comes months after a coalition airstrike killed 40 children on a school trip. 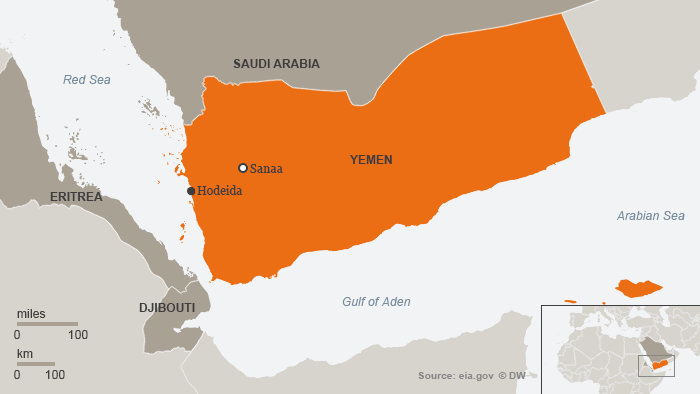 At least 17 people were killed and 20 injured in a Saudi-led airstrike on Yemen's Hodeida on Saturday. The attack presumably targeted a Houthi rebel checkpoint in the city's Jebel Ras area, but instead destroyed a bus full of civilians, medical sources said. Other reports said another bus was also hit during the bombing.

"The final toll is not determined yet because body parts of many victims are mixed with each other," said spokesman for the rebel-controlled Health Ministry Youssef al-Hadari.

Many of the wounded were reported to be in critical condition.

Witnesses cited by the DPA news agency said that the victims were attempting to flee the fighting in the port city, where the forces allied with the Saudi coalition have been trying to dislodge the rebels since June. Hodeida plays a key role for supplying food to Yemen civilians, as 80 percent of all imports and aid enter the country through its port.

A coalition spokesman said that the Saudi-led forces would probe the incident.

"We take this report very seriously and it will be fully investigated as all reports of this nature are," he said. "While this is ongoing, it would be inappropriate to comment further."

A similar Saudi-led airstrike in August killed 51 people, including 40 children who were taking a bus for a school trip. The attack triggered global outrage and accusations of a war crime. While Riyadh eventually acknowledged "mistakes" over the attack, coalition spokesman Turki al-Malki later denied it was a war crime and disputed numerous sources who stated the victims were children.