New problems underline scale of Fukushima crisis | Asia | An in-depth look at news from across the continent | DW | 10.04.2013

Despite assurances that work to bring the reactors in Fukushima under control and restore the surrounding region is making progress, the site of the world's second-worst nuclear accident is still bedeviled by problems. 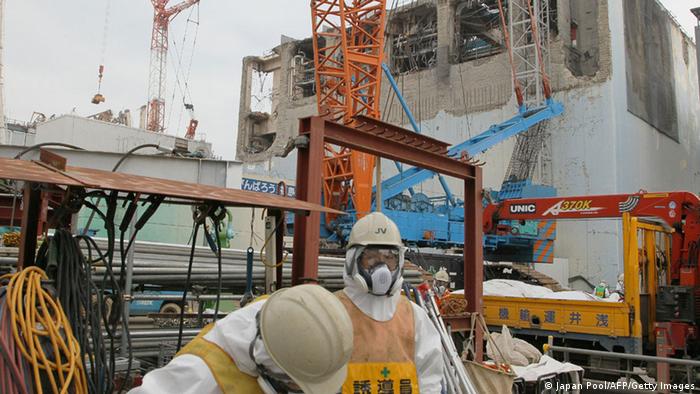 A team from the International Atomic Energy Agency (IAEA) is scheduled to arrive in Japan next week to offer advice to the government and Tokyo Electric Power Co. (TEPCO) about the ongoing efforts to decommission the reactors at the Fukushima plant. For the Japanese side, the timing of the visit could not have been worse.

The 12-strong team, headed by Juan Carlos Lentiijo, of the IAEA's Division of Nuclear Fuel Cycle and Waste Technology, will have many questions for their hosts, not least how water heavily contaminated with radioactivity has leaked through heavy-duty waterproof sheets in three underground storage pits.

The leak at two of the massive pits constructed to hold water that had been sprayed on the reactors to keep them cool was only discovered on Saturday, April 6, by which time around 120,000 liters of water had seeped into the surrounding ground soil. 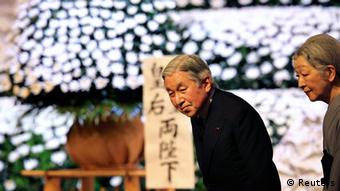 TEPCO immediately announced plans to pump the contaminated seawater into a third underground reservoir, which was scheduled to be completed by Friday, but that was suddenly halted when the third tank was also found to be leaking.

It is not clear whether the recurring problems are a result of a shoddy design or construction efforts - albeit carried out in testing circumstances after the March 2011 earthquake and tsunami caused three reactor cores to melt down - but whatever the cause, it has further shaken public faith in TEPCO and the authorities that are tasked with overseeing its operations.

"It is extremely regrettable that incidents keep occurring at the Fukushima Daiichi power plant," said Yoshihide Suga, the chief cabinet secretary, at a press conference. "The government has instructed TEPCO to carry out a fundamental review of how it is dealing with the problems."

TEPCO President Naomi Hirose was summoned on Monday, April 8, to appear before the minister of trade and industry and was asked pointed questions about the firm's handling of the problems at the plant.

On Wednesday, the company announced that it would complete the transfer all the radioactive water presently held in the temporary tanks to safer containers by the end of June.

Only the latest crisis 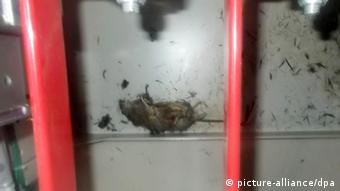 A rat triggered a blackout for sections of the plant, causing temperatures in the reactors to rise

The problem with the reservoirs, however, is only the latest unforeseen crisis to impact the overall gradual effort to render the facility safe again - a process that experts agree will probably take four decades to complete.

Earlier this month, the cooling system suffered a failure and radioactive fuel rods in one of the damaged reactors could not be cooled for three hours before repairs were completed. In March, a rat triggered a 29-hour blackout for sections of the plant, causing temperatures in the reactors to rise.

Critical equipment has also failed, including monitors designed to record levels of radiation in the air, while the company admits that it is also having difficulties stopping groundwater from seeping through the damaged foundations of the buildings on the site.

The litany of problems has inevitably raised questions in the media and the public here.

"A decline in the water level in the tank had been observed since last month and a small amount of radioactive substances had been detected around the tank," the Mainichi Shimbun pointed out in a front-page editorial on Tuesday. "Tepco ... was unable to respond to these changes apparently because of its corporate culture of underestimating risks.

"Tepco needs an expert to judge whether the utility's work to bring the plant under control is appropriate," it added.

The utility has come in for some severe criticism in the two years since the disaster struck - not least for fundamental flaws in the design of the facility that placed the back-up generators required to keep the reactors cool in the event of an emergency in an area that was destroyed by the tsunami - but there can be no doubting the bravery of the ordinary emergency teams who get suited up in protective clothing, helmets and full-face respirators to go to work at the plant every day. 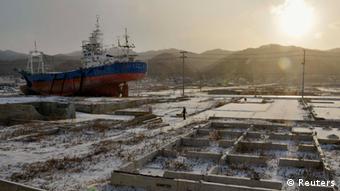 With radiation levels within the other reactor buildings too high for humans to remain for more than a couple of minutes at a time, work is presently focused on removing 1,533 spent fuel rods from the No. 4 unit, which was undergoing a regular maintenance check at the time of the disaster and has not suffered a melt-down.

A steel structure is being built alongside the damaged reactor building that will house a crane. Once completed, which is likely to be in November, the crane will be able to lower the large water casks that are used to shield the rods to ground level, from where they can be transported to a secure site.

Constructing the crane is the responsibility of Jun Hirayama, an employee of sub-contractor Hitachi Plant Technologies.

"I arrived here on the evening of March 16, 2011, and I've been involved in the recovery work here since that time," said 43-year-old Hirayama.

Working on the site in the heavy and uncomfortable protective equipment is draining, particularly in the hot and humid summer months, he agreed, while radiation levels throughout the site are still high. Nonetheless, Hirayama said, "We want to get the plant into a stable condition as soon as possible and I want to also contribute to that."

Two years after the nuclear disaster in Fukushima, many of the inhabitants of affected areas are reluctant to return despite expensive decontamination efforts. (11.03.2013)