Traffic between the Austrian city of Salzburg and Germany has been halted on the orders of the German authorities, according to Austrian state rail. Germany has also boosted controls on part of its border with France. 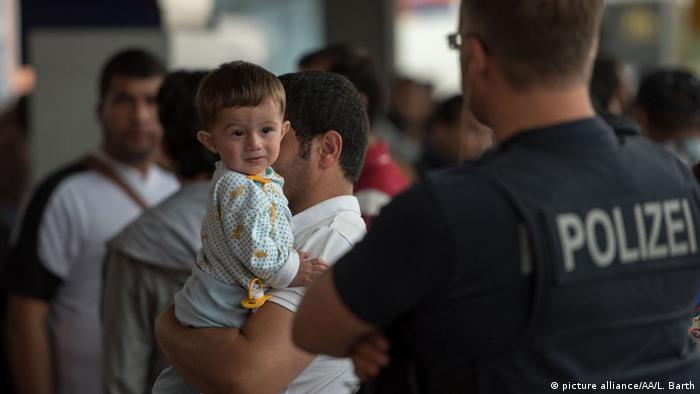 With anti-migrant measures shrinking the Schengen Area, Germany reimposed controls on parts of its frontier with France, and Austrian rail carrier ÖBB stopped cross-border traffic from Salzburg at Germany's request. Several people - many of whom fled wars in Syria, Afghanistan and Iraq - walked the few kilometers separating Salzburg from the German border town of Freilassing (pictured). The Associated Press news agency has reported that police attempted to register suspected migrants as they crossed the border.

Germany expects 800,000 asylum applications this year. On Wednesday, Austria tightened border controls at the country's frontier with Hungary, as authorities struggled to deal with the bottleneck created by Germany's reintroduction of border checks.

After Hungary erected a 175-kilometer (110-mile) barbed-wire fence on its border with Serbia and imposed draconian penalties on those who manage to cross, migrants began attempting to transit via Croatia. Prime Minister Zoran Milanovic said migrants would be free to cross: "Barbed wire in Europe in the 21st century is not an answer - it's a threat."

Chancellor Angela Merkel has been doing double duty, attempting to sign fellow EU leaders up to mandatory migrant quotas and also divvy refugees up among Germany's 16 states. State premiers demand more financial help to accommodate migrants than the 6 billion euros ($6.75 billion) agreed by the governing coalition at the federal level last week. Three billion euros have been set aside in the 2016 budget for federal migrant assistance and a similar amount has been allocated to states and municipalities.

"The important thing now is to create an orderly and transparent process to deal with the large number of refugees," Merkel said after meeting with state leaders on Tuesday.

On Wednesday, Germany's federal Cabinet is expected to decide whether it will back the deployment of up to 950 armed troops to the Mediterranean Sea, according to information from the press agency DPA. The soldiers would join an EU military mission to dismantle the trafficking networks bringing migrants from North Africa to Europe in unseaworthy boats.

German central bank head Jens Weidmann said the current influx of refugees presented a huge challenge, but also an opportunity in the face of the country's aging population. However, the Bundesbank chief made it clear that those opportunities hinged on a successful integration of the newcomers into society and the domestic labor market.

"Coping with the influx of refugees will demand a lot from Germany," Weidmann told the daily "Süddeutsche Zeitung." "But it also brings with it opportunities."