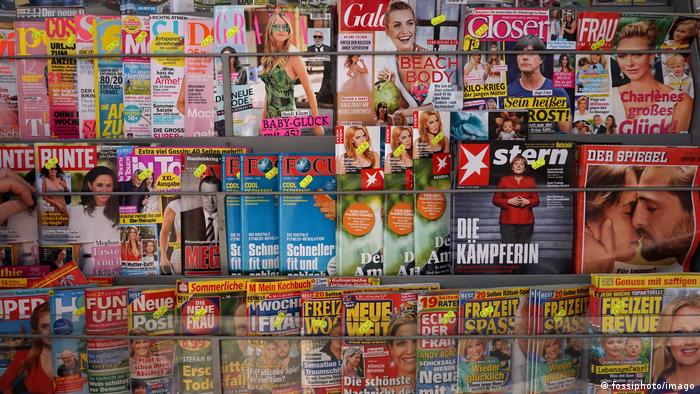 Women's magazines take up a large part of the space in newsstands. German women's magazines like Bild der Frau and Freizeit Revue printed half a million copies each in the first quarter of 2021.

With femMIT, Romina Stawowy is striving for something different from a magazine with recipes, fashion and make-up tips. She believes that such publications ensure that women always view themselves as inferior. "A magazine touting 10 tips to make you more attractive to men does not appeal to me personally. And there are many women who feel the same," Romina Stawowy says.

That is why the Dresden-born editor decided to start her own women's magazine last year during the first COVID lockdown— one that will hopefully inspire reflection among female and male readers, without deepening the divide between the sexes.

Rational facts instead of noisy activism

Stawowy wants to bridge a gap, which, in her opinion, has appeared between standard fashion magazines and feminist ones. "Feminist magazines are too confrontational for me, despite being justifiably so," she says. "Surely, it is important sometimes to be loud, as activism needs to be, but I believe that you can only address a certain group in this way. I don't feel represented in these activist voices," she adds. 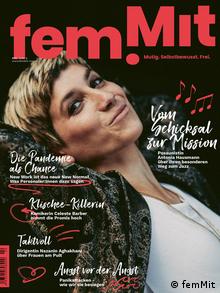 The single mother of three sons wants to create positive role models with her magazine, role models who stand for diversity, equality and equal opportunities, courage, and for doing things differently. Facts, numbers and diagrams help keep the discussion factual and objective. Stawowy hopes to raise both men and women's awareness of inequalities, and credible data creates a solid basis for argumentation, she says.

In the first issue, Stawowy explains how women can gain more presence in the media. She lists the names of female experts that media organizations can contact for interviews instead of — as is more often the case — approaching men.

For example, 45% of virologists, infection epidemiologists and microbiologists in Germany are women, but online reports on COVID-19 have only featured 30% women, compared to 70% men. Only about 7% of those women were named as experts, 5% as researchers and only 4% as virologists.

By presenting and organizing such facts, femMIT wants to objectively contribute to the discussion about equality.

Women in the East and the West

Another specialty of the magazine is its emphasis on former East German states.

Stawowy herself was born in Saxony in 1982 and is a child of the post-reunification era.

Her aim is to strengthen women's voices from the east. "The publishing houses of many women's magazines are not in the east. That could be a reason why many women from here are not represented. On the other hand, I would like to find cool women here, and there are many. I want to feature women who have not been seen on magazines like Barbara, Emotion or Emma."

The cover of femMIT magazine showcases women like the trombonist Antonia Hausman from Saxony. For the next edition, Romina Stawowy is planning to feature a doctor from Dresden. Thirty years after reunification, Romina Stawowy does not want to think about borders between former East and West Germany. The socialization and the status of women before 1989 must have been different in both Germanys, but there is no right or wrong.

"There are more women in leadership positions in the east. But it irritates me when people gush about how emancipated and modern women in East Germany were, because they often forget that before 1989, women did the housework alongside their jobs. It was always a double burden. I don't know any father who changed diapers. Instead of comparing, we need to pick out the best from the experiences of women in the East and the West. We must learn to accept each other for our decisions."

Stawowy knows that not every woman strives to be a leader, but she wants more women to have the possibility of making this decision themselves and to not face negative consequences for it, namely, less money, less pension and less time with the family.

"We must speak about what is required at the workplace," she says, pointing out that a general reduction of working hours would allow everyone to have more time for friends and family. "They would be more relaxed. Men could take on more of the tasks at home. Even that is equal rights to me," she says.

Diversity is an issue that is particularly dear to the femMIT publisher. "It is important for me to include everyone. And that is why I also pay attention to language. Gender-sensitive language is also part of that. Some readers may not be used to it, but language changes. I am convinced that this will adjust by itself and we will find a form of gender-sensitive language that works for everyone.

The next issue is already in production and the publisher has one more wish: "I once noticed at a newsstand that the section on the left side of the shelf with the magazines was called 'Women and fashion,' and the one on the right side only said 'Men' and not, 'Men and barbecuing' or 'Men and cars.' My magazine was placed under 'Women and fashion.' I know that I don't have a right to special placement at a newsstand and told the cashier in a friendly manner to put my magazine in some other section."

The femMIT magazine stands out from baking and fashion magazines in a good way and the first issue makes one hope that the market for women's magazines is set to change.

"Action days" are a bit of a double-edged sword. They do attract attention — as with German Diversity Day this week. Usually, though, the issue is then ignored for the rest of the year, writes Sheila Mysorekar.