Iran's President Hassan Rouhani has said his trip to Europe signals a turning point in his country's relationship with the bloc. His visit comes soon after western countries lifted sanctions after the nuclear deal. 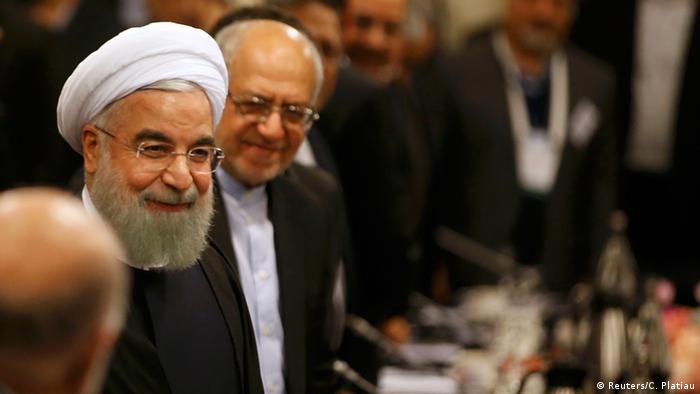 "A new chapter has begun in Tehran's relations with the EU, including France," Iran's ISNA news agency quoted Rouhani as saying on his arrival in Paris on Wednesday.

The president was also due to sign a deal with French carmaker Peugeot, which is planning to return to the Iranian market with its partner Citroen, French news agency AFP quoted a source as saying.

The two would work with Iran's Khodro to produce 200,000 vehicles a year using parts manufactured in Iran and the first vehicles would roll out in 2017, AFP said. Peugeot pulled out of Iran in 2012 after western sanctions were imposed on the country over its nuclear program.

Rouhani arrived in Paris after a trip to Rome earlier this week. At a press conference in the Italian capital, Rouhani insisted his country was open to working with the US. "If American investors and the heads of the American economy want to come to Iran and invest in my country, there are no problems from our point of view," he said.

The president signed 14 agreements worth billions of euros in areas such as energy, industrial machinery, shipbuilding and transportation with Italy.

On Tuesday, Rouhani met Pope Francis and discussed the need for religious leaders to speak out against terrorism and extremism. Freedom of expression "doesn't mean offending that which is sacred to other people's faith," he said in an apparent reference to the French magazine "Charlie Hebdo."

"All religions are to be respected, their books and the millions of people who follow the faith," Rouhani said, adding that insulting them "creates division and doesn't help anyone." The pope had issued similar statements last year in the aftermath of the Charlie Hebdo attacks, saying that if somebody were to insult something sacred to him, like his mother, then they could expect a slap from him.

Following the news that nude statues were covered in museum during a visit by Iranian President Hassan Rouhani, Italian social media users express their anger against a gesture seen as direspectful of their culture. (27.01.2016)

Iran's President Rouhani arrives in France Wednesday for talks with the government and business. The prospects are rosier since sanctions against Tehran were lifted a few weeks ago. Elizabeth Bryant reports from Paris. (27.01.2016)