Naldo: ′What are three months out when others are battling cancer?′ | Sports | German football and major international sports news | DW | 15.03.2018

Naldo: 'What are three months out when others are battling cancer?'

Schalke defender Naldo is enjoying time at his third German club. In an exclusive interview with DW, the Brazilian talked about his life, former clubs, racism in football and World Cup dreams. 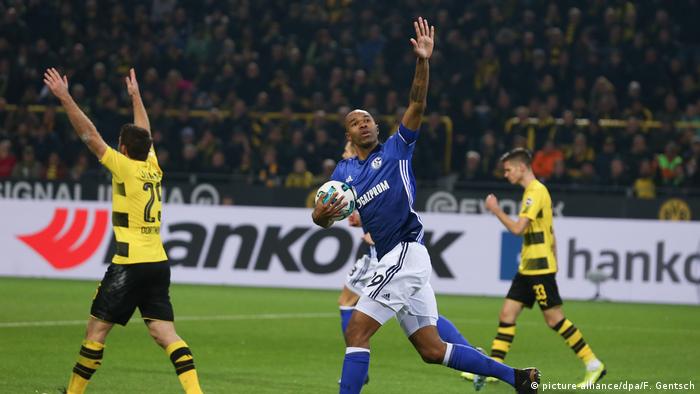 DW: How often are you asked about your age?

Naldo: (laughs) Often. Very often. It's part of it though. I'm happy that I still have the desire to play football at 35.

You're the oldest player in Schalke's squad. Your teammates call you 'Papai' [Portuguese for father].

Yes, that's true. It's respectful and because I always try to be an example. I try to help the team and not just on the pitch. I explain to them they should always keep their feet on the ground. That's why they call me 'Papai'. I'm an experienced player, but still have the feeling I can learn something from the lads. I learn every day at the same time as using my experience. You always have to keep talking and respect one another. That's hugely important.

Your head coach, Domenico Tedesco, is three years younger than you. How would you describe him?

He's the boss. He's a very intelligent head coach and he's good for us, very good. I have huge respect for him. It doesn't matter that I'm a little older than the head coach. He's still the boss.

Thirteen years ago, you came to Germany from Brazil. Do you remember that time still?

That's a long time ago, but I still feel like I came to Werder Bremen yesterday. I want to thank my head coach back then, Thomas Schaaf, for integrating me into the team so quickly. I knew then I wanted to stay in Germany.

That's unusual for a Brazilian, isn't it?

Definitely, but I come from the south of Brazil and it's similar there to here in Germany. Punctuality for example [is one common trait] and the weather is not always ideal. Sometimes it's flipping cold there. I think that's why it worked out so quickly. It's a shame that so many Brazilians go back to Brazil so quickly.

Why do you think that is?

The wife always plays a big role. When you come home and she or your family are sad - that's not easy. It was different for me. My wife always had a smile on her face and that was really, really important for me.

At your first two clubs, Bremen and Wolfsburg, you played until the end of your contract. Meanwhile, many players swap clubs quickly with money playing a big role. How do you see it?

Ten years ago, it was different. Everything is much quicker now. Young players aged 18, 19 play one good season and think they're ready for the next level and think they've already achieved everything. But that is wrong. They have to be careful not to take that step too soon. I gave everything for Bremen, Wolfsburg and now Schalke and try to be there for the club. Not just on the pitch, but also off it too. I want to be an example and represent the club well.

You've had many highs, but also some lows in your career. What's stayed in your mind?

I will never forget returning to the pitch after my serious injury [in the 2010/11 season]. It was on my birthday and it was against Hamburg, so it was a derby. The whole stadium stood up and shouted my name - it was a very special day for me. I'm a positive person and I knew I would come back. I fought and overcame the injury. An injury is nothing though when you see how many people are in hospital fighting for their lives. What are three months out when others are battling cancer? We have to think that way - that's why an injury is never really that bad.

With your equalizer against Borussia Dortmund a few weeks ago, you put your name in Schalke's history books.

(laughs) Yes, that's true. That 4-4 draw was indescribable. It was incredible. To equalize in Dortmund after being 4-0 down... And to score the equalizer in injury time. That is a memory that will never fade. We still talk about it, and not just at the club, but the fans as well of course. It was a moment I will never forget.

Sadly racism and discrimination are still topics in football. Recently, there were incidents in Hanover, and in other European leagues. What do you think?

I am an integration mentor of a Bundesliga charity and have been involved through them. I don't understand that we still need to talk about racism and that these incidents still happen. It's just sad. I'm fighting so that it won't happen in the future. We are all the same. We always have to have respect for one another - only then will the world be a better place. 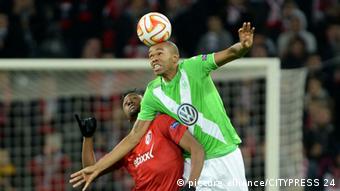 Your next Bundesliga game is against your old team, Wolfsburg. If you win there, things could be really tight for 'The Wolves'.

Yes, that's sadly true. I follow Wolfsburg, but also Bremen. Both are fighting against relegation - it's no easy time for them right now. I think Wolfsburg have enough quality though. They just have to play more as a team, everyone has to run for each other - only then will it work. But I definitely want to win the game on Saturday.

What emotion do you have playing against a former team?

I have huge respect for Wolfsburg and had four great years there. If I score, I won't celebrate out of respect. Both former teams are in my heart and I have my fingers crossed for them.

To finish, a look into the future. What dreams have you got?

I won the German Cup with Bremen and Wolfsburg. I'm in the semifinals with Schalke against Eintracht Frankfurt. They're playing well this season, but it's a dream of mine to head back to Berlin and win the cup one more time.

A World Cup final with Brazil this summer would also be nice though?

Yes, that would be a possibility, but it'll be tight. I won't be at the upcoming friendly games as the head coach didn't select me. It's almost impossible for me to be involved. But even when the chances are small, I still have hope. I'll play well every week and then we'll see whether the head coach will consider me.

You have dual citizenship - German and Brazilian. Who are you crossing your fingers for in Russia?

Both. If Germany and Brazil play each other, then I'll be cheering on Brazil. If Brazil are knocked out, then of course I'll cross my fingers for Germany.

Ronaldo Aparecido Rodrigues, Naldo for short, was born on September 10, 1982 in Londrina, Brazil. In 2005, the central defender joined Werder Bremen. He won the German Cup with Bremen and later with Wolfsburg. In 2016, he joined Schalke. Since 2014, the 35-year-old has had German citizenship.

This interview was conducted by Thomas Klein.