Naked bodies and power structures: A cultural history of bathing

Hygiene is currently a serious civil duty, but bathing is a cultural institution steeped in tradition. An exhibition in Baden-Baden peeks into the bathhouses of history, revealing insights into power and politics.

A warm bath can work wonders. The ancient Egyptians knew it; the ancient Greeks swore by it. And the ruins of Roman Baths are a exceptional testimony to their bathing culture.

Since then, bathing has been more than just about cleaning ourselves. When we look into the bathrooms and bathhouses of history, especially through the lens of art, not only do we see one of mankind's oldest cultural technology but we can gain insights into a society's power, class and gender dynamics. "Bathing has always been a social matter," says Hendrik Bündge, curator  of a new exhibition on the topic, "and it is still ideologically, religiously, socially and culturally charged to this day."

"Körper. Blicke. Macht. Eine Kulturgeschichte des Badezimmers" (Bodies. Glances. Power. A cultural history of the bathroom) at the Kunsthalle Baden-Baden, prepared in collaboration with Mucem in Marseille, exhibits works from all eras of art. From an antique ceramic bowl painted with a naked youth to a medieval carving of women in animated conversation; from a Renaissance bathhouse painting to a Japanese Netsuke figure of a mother bathing her baby, the broad-ranging collection spans time and geography.

The exhibition boasts a version of Jaques-Louis David's famous painting The Death of Marat, along with everyday objects such as old barber bowls, bath heaters and hammam sandals as well as the works of well-known artists such as Albrecht Dürer, David Hockney, Joseph Beuys and Thomas Demand.

For his photographic work, Deman reconstructed the place where the politician Uwe Barschel was found dead — a bathtub.

Another photo depicts foot washing as performance art, demonstrated by the artist Joseph Beuys and captured in black and white by his long-time documentarian Ute Klophaus.

From antiquity to the present, "Washing the body as a social practice," says curator Bündge, "is as old as mankind itself." 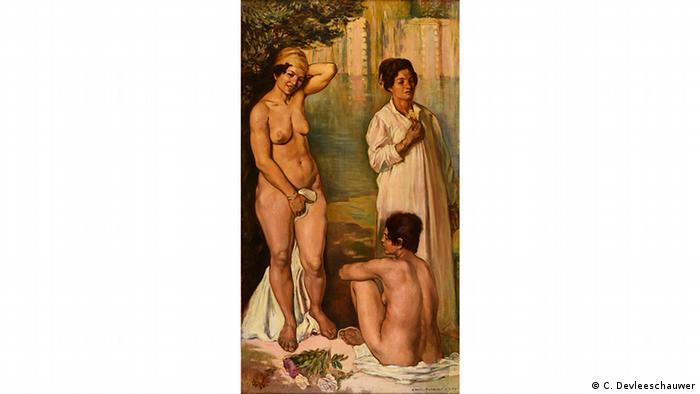 Bathing Women by Emile Bernard in 1900

Throughout history, cleaning rituals have been about more than just hygiene, health and well-being. The ancient bathhouse was considered a social meeting point and a suitable place for business: "Political contacts were made and negotiations were held there," Bündge told DW. The Greeks doused the bodies of steeled men with cold water, while the Romans loved a warm soak. "Even if some feared for their manpower in too much heat." During French absolutism, water was avoided for fear of epidemics, opting instead for small bottles and powder jars.

Over the centuries — especially in art — the male gaze has focused on the presentation of the female form. Representations of naked women are a constant across historical and cultural contexts, but why is it that subjects of art history's nudes are consistently predominantly female? "In the past 700 years of art history," says Bündge, "this has to do with the fact that male painters painted the naked female body and male viewers liked to hang these pictures up." That only began to change in the 20th century.

The Baden-Baden show exhibits these private and public baths as places of cleaning, as a battleground for the sexes, but also as a place for political power struggles. And if in these hygiene conscious times you can't find a soap dispenser beyond the first exhibition room, a 100-year-old machine is on loan from the German Hygiene Museum.

From lakes to saunas and parks: Is Germany's nudist culture, known as FKK, dying out or still making waves? It's still strong enough to inspire a change of attitude for Berlin-based expats. (24.07.2019)

Dipping in the pool, snacking on french fries and ice cream, sunbathing in the park: That's how people spend a day at the "Freibad." Here's a look at some of the Germans' typical habits at outdoor public pools. (29.05.2019)

Munich police scolded female sunbathers for exposing their breasts along the Isar River. The incident prompted a backlash and greater regulatory clarity over what women can put on display in public. (28.06.2019)

The history of bathing in the arts

Nudity, mud and cleanliness: An exhibition at the Staatliche Kunsthalle in Baden-Baden shows various representations of bathing through the ages. (13.03.2020)

Germans find it easier to strip naked on a beach or in a sauna than people from many other countries. A brief history of the country's nudism movement, known as FKK. (06.06.2018)

Museums in Europe are bracing themselves for gas shortages and high energy prices. Politicians are promising help, but how bad could it get?