Myanmar's shift to a democratic government, and the lifting of sanctions, have opened the door to lucrative new markets for jade traders. Trade of the precious stone remains hindered by corruption and low prices. 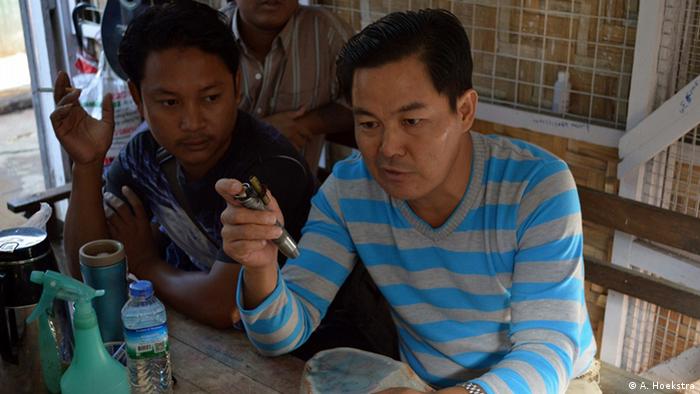 Jade trader Ko Art takes another look at the heavy jade stone that lies on the table in front of him. He puts a flashlight in it and the stone turns green from the inside. The seller, an Indian man with a moustache and a pale white shirt, looks over his shoulder. He hopes to receive $6,000 for it, but Ko thinks differently. “I can offer you $1,000."

In the city of Mandalay, Myanmar, in what is considered the biggest jade market in the world, Ko meets with buyers and sellers of this rare stone that is used for jewellery. And now that most of the economic sanctions on Myanmar have been lifted, the government hopes to export more jade to Europe and the United States.

If Myanmar's government succeeds in giving the industry a better appearance, it could become easier to sell jade on the Western market. The industry has its share of controversy. According to the NGO, Global Witness, the jade market is beset by corruption, in which the government, the army, drug lords and powerful businessmen work closely together.

This has led to land conflicts, harassment and accidents in unsafe mines. In Kachin state, home of a decades-old conflict for independence, many people believe jade revenues are helping to underwrite the army's war, Global Witness says.

Now that Myanmar is being led by a democratic government, things are starting to improve, Miguel Chanco, a Myanmar expert at the Economist Intelligence Unit (EIU) told DW. "The minister carried out an inspection in April, which presaged a flurry of new regulations, tightening the government's hold on the sector," Chanco said. "These included a cap on the number of vehicles and heavy machines jade industry players can own. The government also announced that mining firms in major areas need to conduct environmental research if they want to extend their licenses." 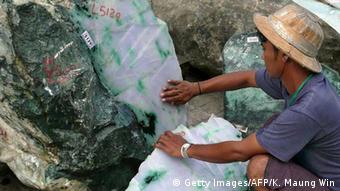 Jade stone is prepared before it is sold at auction

The US has also lifted economic sanctions, including one that bans the import of jade and rubies from Myanmar. Exporting to the West has become an attractive prospect for Myanmar’s government.

For Ko, and many other jade traders, that would be a relief. For many years, China has been their primary market. But with the cooling down of the Chinese economy, jade sales have plummeted. Small traders like Ko, who has been in the jade business for 20 years, are having a hard time. “The sales have declined and the value of the stones has decreased,” Ko told DW. “If a stone was worth $500 two years ago, then it may be worth only $250 now.”

Despite that, jade - which comes from mines in Myanmar’s Kachin state - is still an extremely lucrative trade in Myanmar. According to Myanmar's government, which is not usually transparent about the jade trade, the export value is over $3 billion per year.

But the real value is thought to be much higher. Experts from Harvard University estimate that the annual value could be $8 billion per year. Global Witness, which published a lengthy report about Myanmar’s jade last year, estimated that the value of the country’s jade trade in 2014 was up to $31 billion. That's almost half of Myanmar’s GDP from that year.

A better future for jade traders?

Shortly after the lifting of sanctions in October, Myanmar's government invited US and European traders to a gem emporium in the capital Naypyidaw, hoping it would open new doors.

"America remains one of the largest markets for precious stones," Chanco says. "But I don’t expect the industry's prospects to brighten overnight as it still faces a number of structural impediments -namely widespread smuggling and corruption, alongside long-standing armed conflicts in jade-rich regions of the country."

For the traders in Mandalay, this means that for now they will keep their focus on Chinese buyers. That also goes for Ye Lin, who sells light green bracelets on behalf of his uncle. "I sell them for $700, but we can always negotiate", he says with a wink. "How much do you want to pay for it?"

Residents were shocked after two large pieces of metal dropped from the sky in a jade mine in Kachin state. Authorities are looking into the matter. (11.11.2016)