Residents were shocked after two large pieces of metal dropped from the sky in a jade mine in Kachin state. Authorities are looking into the matter. 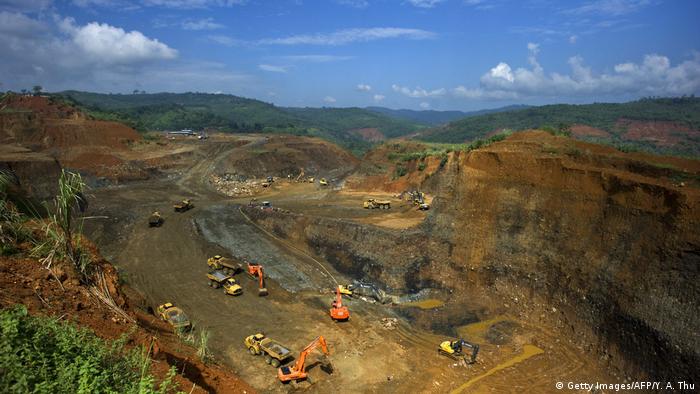 A huge metallic chunk fell in a jade mine in Hpakant (pictured above) in Myanmar's Kachin state on Friday, local media said.

There was a loud crack and the cylinder rolled for about 50 meters after it landed in the jade mine before getting stuck in mud. Pictures in social networks showed parts of the metal cylinder and cables attached to it.

A second chunk of metal with Chinese symbols landed around the same time on the roof of a village close by, a report in the state-run daily "Global New Light of Myanmar" said. No one was injured.

There were speculations that the pieces belonged to a satellite, an aircraft or a rocket motor, the newspaper said. Chinese media also reported on Friday that they had sent a satellite into space the same day, but no connection between the two events could be established.

Officials were looking into the incident, the newspaper said.

Myanmar has detected its first case of the Zika infection. A pregnant foreign woman has been diagnosed with the mosquito-borne virus. (28.10.2016)

Lawmakers in Myanmar have repealed a law often used to target political dissidents under the former military regime. Many of those who voted for the repeal, including Aung San Suu Kyi, were victims of the law themselves. (05.10.2016)