Myanmar: US calls on China to hold junta accountable

The UN special envoy for Myanmar warned that a "bloodbath" was imminent in the Asian country as the US urged Beijing to pressure the leaders of the military coup. 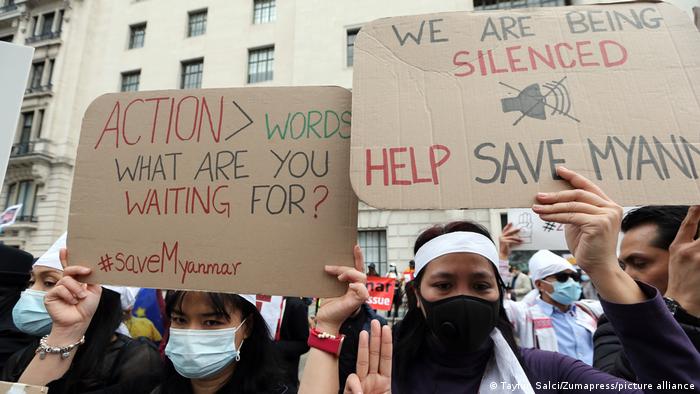 A UN envoy warned of a possibility of a civil war

The US said China should use its influence to hold Myanmar’s military leadership accountable for the unrest that has so far claimed over 500 lives. Separately, the UN envoy on Myanmar warned that the country was on the brink of a civil war.

Myanmar's junta is facing daily protests since ousting the elected leader Aung San Suu Kyi on February 1. The military responded with a brutal clampdown that has left hundreds of civilians dead.

On Wednesday, the US said it was continuing to call on China to hold those responsible for the coup "to account."

Unlike Western nations who strongly condemned the military action, China responded to the coup with caution and cited the importance of stability.

Myanmar might face a civil war "at an unprecedented scale," the UN special envoy for the country warned at a closed session of the UN Security Council on Wednesday.

"If we wait only for when they are ready to talk, the ground situation will only worsen. A bloodbath is imminent," Christine Schraner Burgener said.

She called on the international community to consider "potentially significant action" to restore democracy. The envoy also pointed to armed ethnic groups on the country’s eastern and western borders that are increasingly speaking out against the military crackdown.

"The military's cruelty is too severe and many (armed ethnic fighters) are taking clear stances of opposition, increasing the possibility of civil war," Burgener said.

"One-sided pressure and calling for sanctions or other coercive measures will only aggravate tension and confrontation and further complicate the situation, which is by no means constructive," Zhang said.

The foreign ministry took the decision as it witnessed increasing violence in Myanmar. It said the situation is "unpredictable" after more than 500 people died since protests began following the February 1 coup.