Police hit demonstrators with rubber bullets and tear gas, after multiple opposition members were reported held in Yangon raids. Meanwhile, China said it hopes to engage with "all parties" to ease the political crisis. 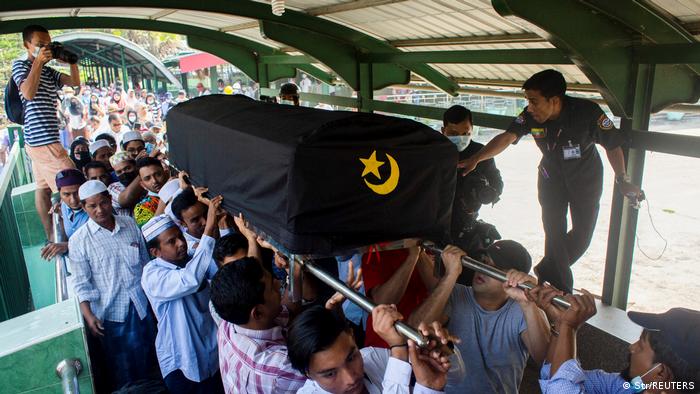 People attend the funeral of U Khin Maung Latt, 58, a National League for Democracy chairman in Yangon

Thousands of Myanmar anti-coup demonstrators defied a military crackdown on Sunday, following overnight raids in Yangon which saw soldiers detain an official from Aung San Suu Kyi's party along with several others.

Meanwhile, police in Myanmar's ancient former capital, Bagan, opened fire on demonstrators, wounding several people. At least five people were reported injured as police sought to break up the Bagan protest, while photos showed one person with bloody wounds on his chin and neck, believed to have been caused by a rubber bullet.

Bullet casings collected at the scene indicated that live rounds were also fired.

Bagan is best known for being one of Myanmar's top tourist attractions and is a UNESCO World Heritage site that plays host to more than 2,000 ancient pagodas or their remnants.

Protests elsewhere on Sunday, including in the two biggest cities of Yangon and Mandalay, were also met with the use of force by police firing warning shots, tear gas, rubber bullets and stun grenades.

Large protests have taken place across many cities and towns in Myanmar, with security forces responding with increasingly brutal crackdowns and new measures to curb the demonstrations.

People also reported that there were multiple police raids in Yangon on Saturday night, seeking to seize organizers and supporters of the protest movement. A ward chairman from Aung San Suu Kyi's National League for Democracy (NLD) party, was also found dead in a military hospital on Sunday morning, according to a Facebook post made by NLD lawmaker Sithu Maung.

Following the discovery, rumors swirled that Khin Maung Latt, 58, died following a beating in custody, after being taken from his residence this week. However, no official cause of death was immediately announced.

NLD official Soe Win confirmed that other officials were arrested in overnight police operations, but the exact number is not known.

The UN rights office said it has verified at least 54 deaths and over 1,700 detentions since the coup.

China to intervene in crisis

Following Sunday's protests, China's top diplomat, State Councillor Wang Yi, said Beijing is willing to engage with "all parties" to ease the crisis in Myanmar, and will not take sides.

Chinese officials have said the situation in Myanmar was "absolutely not what China wants to see" and have dismissed social media rumors of Chinese involvement in the coup as nonsense.

"China is ... willing to contact and communicate with all parties on the basis of respecting Myanmar's sovereignty and the will of the people, so as to play a constructive role in easing tensions," Wang said.

"China has long-term friendly exchanges with all parties and factions in Myanmar, including the National League for Democracy, and friendship with China has always been the consensus of all sectors in Myanmar," he added.