Myanmar: Over 100 dead in jade mine landslide disaster

A wave of mud has swept through an open jade mine in northern Myanmar, killing scores of people looking for scraps. Myanmar officials said the death toll is likely to rise. 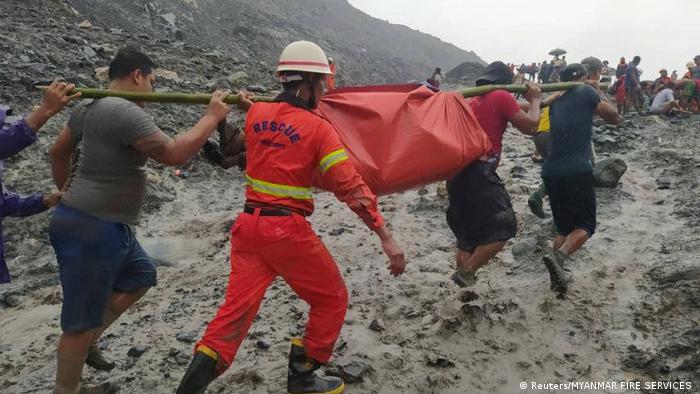 A landslide at a jade mine in northern Myanmar has killed 162 people.

The country's Ministry of Information said that 123 bodies had been recovered from the site so far. The government put the death toll at 162, matching an earlier figure put out by emergency services officials.

Search and rescue operations were suspended shortly after they began as a result of heavy rains, according to a local police officer.

The people were scavenging for jade scraps left behind by bigger firms operating in the mountainous area, known for its precious gemstones and natural resources. According to Myanmar officials, the death toll is expected to rise.

"Other bodies are in the mud," Information Ministry official Tar Lin Maung told Reuters news agency. "The numbers are going to rise." 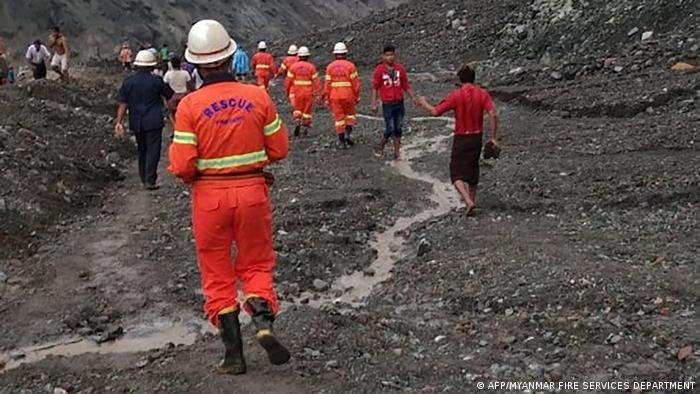 Rescue workers search for survivors after a landslide in Kachin state

The German Foreign Ministry extended the government's condolences, saying: "Our thoughts are with the families of the victims and injured."

The Hpakant area in the state of Kachin, near the Chinese border, is known for its dangerous, open jade mines.

Every year, dozens of miners and people looking for scraps are killed in the area. However, the latest accident is considered the deadliest to hit the industry.

Although official figures place the sale of jade at nearly €700 million ($790 million) annually, independent estimates suggest the industry is worth more than €30 billion.

The revenues from the precious gemstones are often used by the government and local militants groups to fund armed conflict in the region. Rights groups such as Global Witness have called for the resources to be put to good use in the region.

"Clearly, if openly, fairly and sustainably managed, this industry could transform the fortunes of the Kachin population and help drive development across Myanmar," said a 2015 report by Global Witness.

"Instead, the people of Kachin State are seeing their livelihoods disappear and their landscape shattered by the intensifying scramble for their most prized asset."

The UN has called for "urgent measures to spare civilians" amid reports of locals trapped by fighting in Myanmar's conflict-ridden Rakhine State. Scores have been killed and tens of thousands displaced by the conflict. (28.06.2020)

A German tourist has been killed in a landmine explosion near a popular hiking spot for backpackers. An Argentinian woman was also injured. (27.11.2019)