Myanmar's military rulers have said they will keep internet restrictions in place, and accused the media of fanning unrest. They acknowledged scores of deaths since the coup but blamed protesters for the violence. 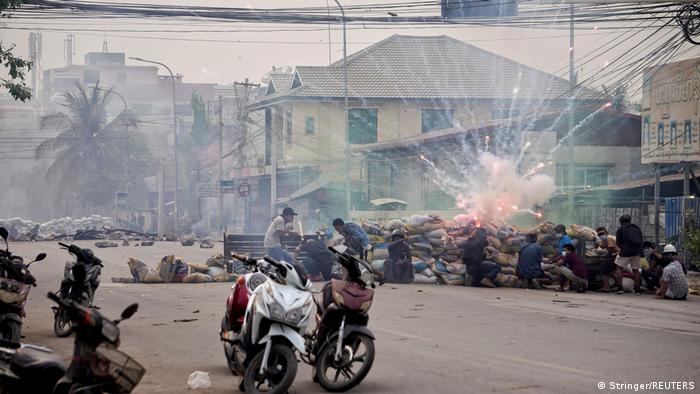 Military coup leaders in Myanmar on Tuesday said they had no immediate plans to lift restrictions on the internet, claiming that violence in the country was being provoked online.

The junta said 164 protesters had been killed and expressed sadness at the deaths during protests since the February 1 coup that deposed elected de facto leader Aung San Suu Kyi.

Monitoring groups put the death toll since the coup higher than 164.

What did the military leadership say?

Junta spokesman Zaw Min Tun said rule of law and stability were most important to the country and that online access would be continue to be restricted for a "certain time period."

Speaking of the deaths, Zaw Min Tun told the news conference he felt "sorry for their losses as they are also our citizens."

He said nine members of security forces had been killed. "Can we call these peaceful protesters?" Zaw Min Tun said, while showing a video of factories on fire. "Which country or organization would regard this violence as peaceful?"

He also said strikes and their effects on hospitals not fully operating had caused deaths, including from COVID-19, calling them "undutiful and unethical."

It went on to air footage of a mayor of Naypyitaw alleging Suu Kyi's National League for Democracy party had committed electoral fraud by inventing voters.

The ruling military also said it was investigating Australian economist Sean Turnell for breaches of Myanmar's official secrets act and immigration offences. Turnell was an economist working as an adviser to Suu Kyi.

The European Union on Monday approved sanctions against individuals tied to the Myanmar coup.

After Suu Kyi was arrested, the junta proclaimed a state of emergency lasting a year. It promised to hold fresh elections, but with no proposed timetable.