Protesters against the military rule have refused to let up as the movement to bring back the country's democratically elected leader dismisses threats of violence. 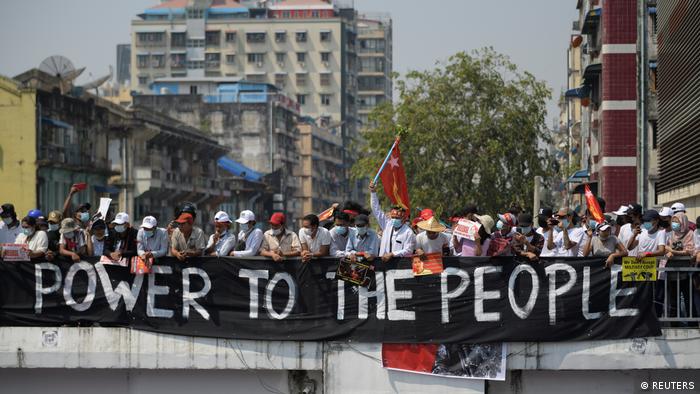 Protesters gathered in cities and towns across Myanmar on Monday as they answered the call for a general strike.

The industrial action brought large parts of the country to a standstill even as the military junta warned that confrontation could cost lives.

Despite the veiled threat from the military, people came out onto the streets as part of the "Spring Revolution" in support of the Civil Disobedience Movement — a nebulous organization that is pushing for open resistance to the junta in an effort to reinstate the civilian government under the democratically elected Aung San Suu Kyi.

The military leadership had warned against Monday's general strike on Sunday in a statement broadcast over the state-controlled television channel MRTV.

"It is found that the protesters have raised their incitement towards riot and anarchy mob on the day of 22 February. Protesters are now inciting the people, especially emotional teenagers and youths, to a confrontation path where they will suffer the loss of life,'' the onscreen text said in broken English, replicating the spoken announcement in Burmese.

The statement also justified the use of deadly force against protesters, saying that criminals had initiated the violence and that "the security forces had to fire back."

Three protesters have been killed so far in the military government's crackdown.

How is the military reacting to the protests?

The junta made attempts on Sunday to more strictly enforce its ban on gatherings of more than five people. They also attempted to block key roads with barriers and demobilized vehicles.

The non-violent protesters were nonetheless able to pass through the roadblocks undeterred.

The military deployed security forces in the capital of Naypyitaw and the main city of Yangon, where thousands of protesters congregated on Monday.

People shared images from the capital on social media which showed police vehicles, including a water cannon truck, moving on a protest march in an attempt to break it up, Reuters reported. Police on foot also chased down the demonstrators as they fled.

"They're chasing and arresting us. We're just protesting peacefully," one woman said in a video posted to Facebook.

A 22-year-old protester, Htet Htet Hlaing, told Reuters that she had been scared about Monday's protest, but would not be discouraged by the junta's threats.

"We don't want the junta, we want democracy. We want to create our own future," she said.

Pressure on the junta grows

External pressure against the military's rule also continued overnight with US Secretary of State Anthony Blinken tweeting support for the protesters in Myanmar.

Protests in the country have been growing since the military ousted the democratically-elected Suu Kyi at the beginning of February under charges of fraud. Although early public defiance of the military was more subdued, protesters have shown an increasing willingness to openly call for the junta to step down.

The military ruled the south Asian country for 50 years until 2015 when they allowed elections to go ahead for the first time.