Firebrand anti-Islam monk Ashin Wirathu was jailed last November by the government of ousted leader Aung San Suu Kyi. Now, the charges against him have been dropped without explanation. 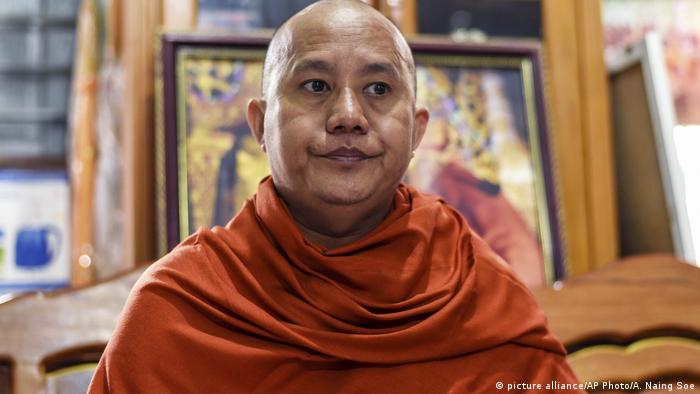 Myanmar's military junta on Monday freed Ashin Wirathu, after dropping hate speech and sedition charges against the monk without explanation.

In 2013, Time magazine dubbed him the "Buddhist Bin Laden."

Why was the monk released?

When sedition charges were brought against Wirathu for derogatory remarks he made about ousted former leader Aung San Suu Kyi in May 2019, he responded by becoming a fugitive from justice. Last November, he turned himself in.

Suu Kyi's government sentenced him to jail on charges that included attempting to bring "hatred or contempt" and "exciting disaffection."

Tatmadaw is Myanmar's military. It was not immediately clear why the charges against Wirathu were dropped nor why he was hospitalized in a military facility.

Who is Ashin Wirathu?

Wirathu is known in Myanmar for his nationalist, anti-Islam rhetoric. Much of his ire is directed against the stateless Rohingya minority.

His prominence stems from deadly religious riots in 2012 between Buddhists and Rohingya Muslims in the western Rakhine state.

In 2017, the National Monks Council, the country's highest Buddhist authority, banned him from preaching for one year. The ban was lightly enforced and was allowed to expire.

Wirathu was a fixture at nationalist rallies. Considered to be pro-military, he railed against corruption and ultimately doomed efforts to rewrite the constitution in the image of something other than the military.

In February of this year, the military seized power, overthrowing Suu Kyi and installing a junta under the name the State Administration Council. Over 1,000 have died in the aftermath and the economy has come to a standstill.

The State Administration Council decided to declare the result of elections in November fraudulent by alleging electoral regularities. Those elections had been won by Suu Kyi's party, the National League for Democracy, in a landslide.

Suu Kyi has been detained since the coup and faces ten years or more in jail for allegedly violating coronavirus-related health protocols and the illegal importation of walkie-talkies.

Before his release from jail, the pro-military Wirathu had complained bitterly in a video message to his large following about his treatment in prison at the hands of the State Administration Council, the junta.