Myanmar jails journalists — ′More trials and prosecution under civilian government′ | Asia| An in-depth look at news from across the continent | DW | 04.09.2018

The sentencing of two Reuters reporters in Myanmar this week has highlighted the dangers facing journalists and media outlets there. DW spoke to journalist Kyaw Min Swe about the shaky press freedom in the country. 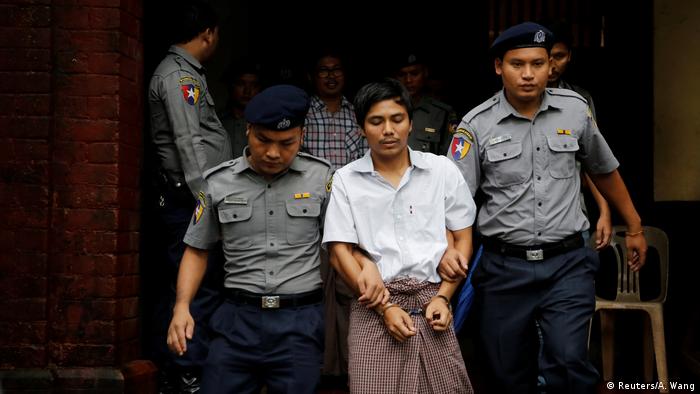 A Myanmar court on Monday found two Reuters journalists guilty of illegally obtaining official documents and sentenced them to seven years in prison.

The high-profile case was seen as a test of progress towards democracy in Myanmar, which was ruled by a military junta until 2011.

Wa Lone, 32, and Kyaw Soe Oo, 28, were investigating the killing of villagers from the Rohingya Muslim minority by security forces and civilians when they were arrested in December. They had pleaded not guilty and insisted they were framed by police for doing their journalistic work.

Several Myanmar news outlets and dozens of civil society groups denounced the jailing of the reporters under the Official Secrets Act, and said their conviction is an assault on the right to freedom of information.

In a DW interview, Myanmar journalist Kyaw Min Swe spoke about the difficulties faced by media professionals in the Southeast Asian country.

DW: What is your take on the jailing of the two Reuters journalists, Wa Lone and Kyaw Soe Oo, for seven years under the Official Secrets Act in Myanmar? 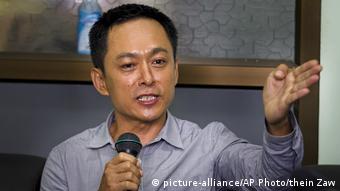 Kyaw Min Swe: 'The lack of the rule of law with regard to the media sector is a big challenge in Myanmar'

How have local news outlets and journalists reacted to this conviction and sentencing?

Journalists and media professionals in Myanmar believe the two Reuters reporters were trapped by the authorities and actually did nothing against the law.

[Editor's note: During the pre-trial hearings, a prosecution witness told the court that police had planted military documents in order to frame the reporters for violating the country's Official Secrets Act].

They don't trust the judicial system anymore. They are all afraid about the future of their jobs and journalism in the country.

What are the biggest challenges facing journalists in Myanmar today?

The lack of the rule of law with regard to the media sector is a big challenge in Myanmar. We have a new media law that's intended to protect journalists. But it's not enough. If a journalist maintains professional standards, he or she needs to be protected by the law.

But there are still laws on the statute books like the Official Secrets Act, which was a colonial-era legislation put in place by the British in 1923, which make the work of journalists difficult and even dangerous.

There are many loopholes and inconsistencies when it comes to the execution of laws, and the freedom of expression remains vulnerable.

Since Myanmar's democratic transition began some eight years ago, there seems to have been some changes regarding laws and regulations governing the media. What has changed since then?

The political transition in Myanmar began in 2010, when the generals released Aung San Suu Kyi from house arrest and largely stepped back from the day-to-day running of the country. The military government transferred power to a so-called civilian government, which reorganized the media sector and attempted to establish it as the fourth pillar of power in the country.

The authorities then appeared to promote the critical role played by the media and we welcomed it. Working conditions for journalists improved and organizations like Freedom House appreciated this change by elevating Myanmar's ranking in their media freedom indices.

Later, in 2015, when Aung San Suu Kyi's National League for Democracy (NLD) party swept the general elections, we expected the new government to promote media freedom even more. But the reality turned out to be different. This government is trying to muzzle and control the media. We're frustrated by the fact that the authorities are trying to undermine the role of professional media as the fourth pillar of our democracy.

That's why we are still facing difficulties in doing our jobs everywhere in the country. And journalists are facing even more trials and prosecution under this government than under the previous government.

This situation means that free speech is clearly fading under the current administration.

Kyaw Min Swe is a journalist from Myanmar and executive director of the Myanmar Journalism Institute. Kyaw Min Swe is also editor at "The Voice" and he himself was under investigation in 2017.

Wa Lone and Kyaw Soe Oo were convicted of collecting state secrets by a court in Yangon. They had been investigating a massacre of 10 Rohingya in Rakhine. The UN condemned the ruling, demanding the reporters' release. (03.09.2018)

In June, Thomas Oppermann (SPD), Vice President of the German Bundestag, visited the community radio Khayae FM in Htan Tabin, Myanmar. During his visit, he discussed the role of local media for democratic development. (26.06.2018)