Myanmar violence triggers asylum crisis for India′s northeastern states | Asia | An in-depth look at news from across the continent | DW | 12.04.2021

The volatile security situation and brutal crackdown on protesters in Myanmar has prompted many to flee and cross the border into India's northeastern states. 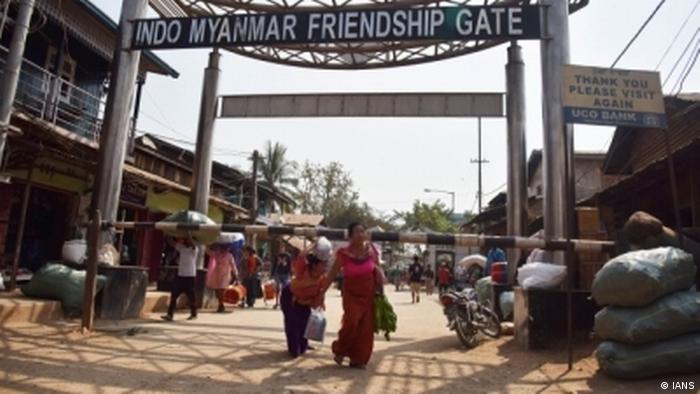 Mizoram is particularly affected by the influx, as its people share ethnic ties with communities on the other side of the border

The situation along the Myanmar-India border is "getting worse," a Myanmar national who recently fled their country and crossed the border into India told DW. "We're worried about our families and friends who have left behind," said the person who is now seeking political asylum in India and asked to remain anonymous.

"The people in India have been very helpful but we are afraid of getting deported by authorities. While some of us are trying to figure out the refugee process, we hope to go back to our country someday soon."

Since the February 1 military coup in Myanmar and the subsequent clampdown on protesters, over 1,000 people from the country have fled and crossed the border into India.

More than 700 civilians have been killed in the space of just 70 days since the coup, according to the Assistance Association for Political Prisoners monitoring group, which says more than 3,000 have been arrested.

The volatile situation has triggered warnings of a brewing humanitarian crisis along Myanmar's border with neighboring India.

Initially reluctant to speak out against the coup, India recently changed its stance and strongly condemned Myanmar junta's escalating crackdown on protesters, calling for the restoration of democracy and an end to violence across its eastern border.

India — which rivals China for regional influence — had previously not followed other international powers' outright rejection of the coup in Myanmar that ousted civilian leader Aung San Suu Kyi.

But India's Foreign Ministry recently appeared to take a stronger line, condemning "any use of violence" and urging Myanmar to release the hundreds of political prisoners now languishing in the country's jails.

"We believe that the rule of law should prevail. We stand for the restoration of democracy in Myanmar," it said, adding that New Delhi is ready to play a "balanced and constructive role" to resolve the crisis.

The Indian state of Mizoram — which shares a porous 400-kilometer border with Myanmar, mostly along the Tiau River — is particularly affected by the influx, as its people share deep ethnic ties with communities on the other side of the border like the Chins.

Indian border guards, however, have been sealing the border and pushing back those trying to enter the country.

The authorities' handling of the situation hasn't gone down well with Mizoram. In a letter to Indian Prime Minister Narendra Modi, the state's Chief Minister Zoramthanga said that the deportation process was "not acceptable" to his state.

"The people sympathize with their cognate group in Myanmar known as Chin. They are anxious how the coup would affect Mizoram as the relationship was so cordial when the transition to democracy was in progress. Mizo (people from Mizoram) are also ready to receive and accommodate the Chin as refugees," Lalmuanpuia Punte, general secretary of the Zo Reunification Organization (ZORO), told DW.

So far over 1,000 people, including Myanmar policemen and their families, have crossed into India since late February.

While most of them entered Mizoram, where the local government and civil society groups have supported them, some people tried crossing into a second Indian state, Manipur.

The state government there recently told five districts bordering Myanmar to turn them away.

"District Administration should not open any camps to provide food and shelter," said the letter, the Reuters news agency reported.

"People trying to enter/seek refuge should be politely turned away," it said.

India's federal government had previously asked local authorities to stop the influx from Myanmar and deport anybody who had crossed over.

After sharp criticism, officials said that the Manipur directive had been withdrawn.

"Mostly, refugees are not reported to the administration and they will not be reported," Punte told DW, emphasizing the sense of solidarity that the people felt across borders.

India's Home Ministry, meanwhile, said state governments were not authorized to accord refugee status to anyone entering from Myanmar, as India is not a signatory to the UN Refugee Convention of 1951 or its 1967 Protocol.