If Munich wins the bid to host the 2018 Winter Olympics, about half of the events will take place in the Alpine town of Garmisch-Partenkirchen. But there are some people there who aren’t sure they even want the Games. 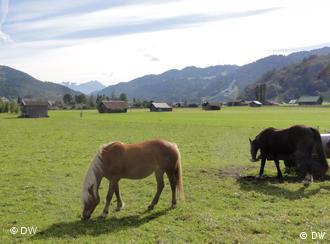 This meadow is a proposed site for the athletes' village

The tallest buildings in Garmisch-Partenkirchen near Germany's border with Austria are churches, but they barely register on a landscape that is dominated by steep mountain foothills. Just outside of town, ski shops and hotels give way to farmland, bike trails, and horses grazing near a stream.

The town is Germany's most beloved ski resort, providing access to the country's tallest mountain, the Zugspitze. It has an undeniable charm, but Andreas Keller, a 72-year-old retired professor, sees a looming threat to the small Alpine resort town: the 2018 Winter Olympics.

"It's a small Alpine valley," Keller told Deutsche Welle. "It's not made for such a gigantic event."

Keller is part of a local volunteer campaign called NOlympia, organized by members of the Garmisch chapter of a Bavarian environmental protection group. NOlympia is trying to keep Garmisch-Partenkirchen from being a junior partner in Munich's bid to host the 2018 Winter Olympics.

One of the biggest sticking points for NOlympia is privately-owned farmland. Olympic organizers want to lease the land from the farmers and turn it into the athletes' village. Andreas Keller says the farmers aren't going to budge. 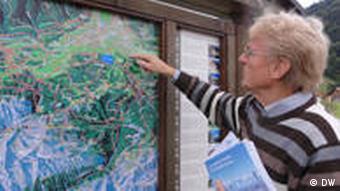 Andreas Keller is worried the Olympics will ruin Garmisch

"It's not only the money. It's also the responsibility for the beauty of this valley," he said. "[The farmers] have a really good feeling that this must be kept and preserved."

Pointing at a map of Garmisch that shows both developed areas of town and the undeveloped farmland, Keller says as he's watched his children and grandchildren grow up in Garmisch, the green parts of the map keep getting smaller.

"Garmisch is still a lovely town, but now a limit has been reached," he said, adding that the city had decided to but a halt to the further development of farmland. "Now the rules should be broken for this one event?"

The area should be preserved for future generations, Keller says, not sacrificed for what he calls "a two week party for the International Olympic Committee."

Less than a mile from the farms Andreas Keller hopes to protect, black and white photos of local skiers from the past line the stone walls of the Garmisch-Partenkirchen city hall. Garmisch is no stranger to the Olympics – it hosted the winter games in 1936. Garmisch's mayor, Thomas Schmid, hopes to see the Games return in 2018 - and a boost in infrastructure development along with them. 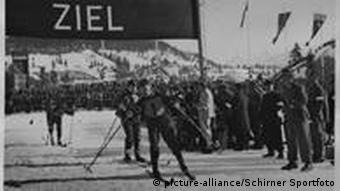 Garmisch hosted the Winter Olympics in 1936

"A tourist resort like Garmisch-Partenkirchen has to invent itself more or less every 10 to 15 years anew, because we are in world-wide competition here," he told Deutsche Welle. "That's why we need impulses and changes in infrastructure."

A successful Olympic bid would accelerate proposed infrastructure changes. One example is a plan that would divert traffic between Munich and the Austrian city of Innsbruck from the center of Garmisch to a proposed mountain tunnel. Without the games, the mayor says this could take 30 years. With the games, there would be a deadline of 2018.

Big winter sporting events aren't new to Garmisch, either. The town is set to host the 2011 Alpine Skiing World Championships, and is involved in a German New Year's tradition, as host of one of the events of the Four Hills ski-jumping tournament.

"The New Year's jump on the first of January is the biggest sporting event, spectator-wise, that we have," said Schmid. "The Olympic events have even fewer spectators."

He admits that while any single day of the Olympics may draw fewer spectators than the Four Hills tournament, there is a big difference in that the Olympics go on for two weeks. But with Munich as the official host city, Schmid thinks Garmisch's contribution would be much smaller, similar to Whistler's role during the Vancouver Olympics in Canada.

"We won't have the hockey games where you have 20,000 people still waiting for the tickets [like they had in Vancouver]," Schmid said. "We'll have it much calmer, much more traditional, and that's why I'm not afraid of organizing it here."

Even with resistance from NOlympia and local farmers, Schmid says Garmisch's Olympic plans can be carried out even without the disputed farmland. He says one percent of the available farm land in Garmisch is under consideration, and they can simply build around any pieces of land that don't get leased.

Talking to the neighbors

But people are starting to come around. At a press conference in Garmisch to announce a new sponsor of the Munich bid application, the bid committee's communications director Jochen Faerber says increased dialogue has led to more support for the Games in Garmisch.

"If you have a party in your apartment, you inform the neighbors before you do the party. And I think maybe at the beginning, sometimes that was missed," Faerber told Deutsche Welle "I think that kind of communication has changed now." 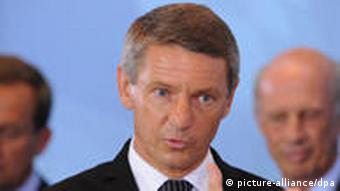 Resistance, however, is still there. Andreas Keller and NOlympia are collecting signatures for a local vote to decide once and for all if the people of Garmisch want the Olympics or not. If Garmisch is out, Munich's chances of getting the Olympics nearly vanish as there is no other location to host the Alpine skiing events. A vote creeps into murky legal waters, though, as Garmisch has already signed a number of contracts as a potential host site.

Ultimately, the final word will come from the International Olympic Committee in July 2011, when it will name either Munich, the French town of Annecy, or Pyeongchang in South Korea as the host of the 2018 Winter Olympics.

The man leading Munich's campaign to host the 2018 Winter Olympics has stepped down, citing illness. Willy Bogner, a former Olympic skier, will be replaced by his deputy, Bernhard Schwank. (06.09.2010)

Munich has hit major snags in its bid to host the 2018 Winter Olympics. An anti-Olympic movement has formed, there are funding issues and bid committee chief Willy Bogner has had to deny press reports of his resignation. (16.07.2010)

Holding a Winter Olympics in Munich would be environmentally sound - and help the city come to terms with the tragedy of 1972, argues the Olympic bid committee. (26.10.2009)