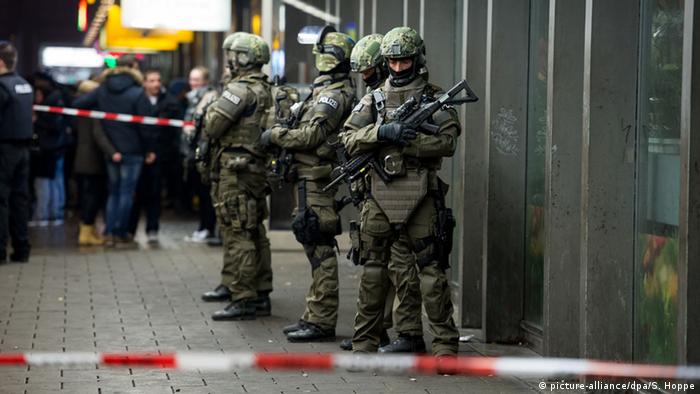 An increased presence of police officers remained across Munich on New Year's Day, as the search for potential assailants associated with the self-styled "Islamic State" (IS) group continued. About 550 police officers had been on patrol across the city overnight, some of whom were heavily armed and had been recruited from neighboring police departments, as people celebrated New Year's Eve.

"There were solid indications of between five and seven attackers," Bavaria's state interior minister, Joachim Herrmann, said in an overnight press conference.

Munich's main train station and a station in the western borough of Pasing had been closed off after foreign and domestic intelligence services had tipped off police about a suspected IS suicide attack planned for New Year's Eve. The stations reopened a little after 3:30 a.m. (0230 GMT/UTC), allowing trains to depart according to schedule.

The interior minister of Bavaria told reporters that the government had received leads pointing to a group of five to seven potential IS sympathizers plotting several coordinated suicide attacks in the Bavarian capital.

Bavarian public radio station "Bayerischer Rundfunk" said that the police was looking into seven Iraqi individuals, whose names were reportedly known to them. The station did not identify the source of its information.

Security officials said that the severity of the threat level had been comparable with the terror warning in Hanover in November 2015, when a friendly soccer match between Germany and the Netherlands was called off amid warnings of an impending attack. The game had been scheduled within a week of the November 13 attacks on Paris, in which 130 people died; the German national team were in Paris that night, too, losing 2-0 to France in a friendly.

Most people in Munich went ahead with their plans for New Year's celebrations despite the terror threat, enjoying fireworks all over the city at midnight. The police began to ease the terror warning by 2 a.m., saying that intensive investigations had not corroborated the initial warnings of an attack to strike at midnight.

Meanwhile, in Brussels, fireworks were called off due to an increased terror threat. The Austrian capital Vienna has also raised its terror level in recent days after receiving intelligence pointing at an imminent risk. Police in Germany's capital Berlin did not allow revelers to approach the Brandenburg Gate with backpacks or large bags.

No attack, but PEGIDA pounces

In the summer of 2015, Munich's train station had been one of the main arrival points for refugees in Germany. Hundreds of citizens had come to the train station to welcome those fleeing conflict in Syria and elsewhere.

As more people came, right-wing groups led by PEGIDA (which is a German acronym for "Patriotic Europeans Against the Islamization of the Occident") grew increasingly concerned that some of those arriving might be radicalized extremists using asylum as a loophole to crash into Europe and commit attacks.

Following last night's terror warning for Munich, PEGIDA chairman Lutz Bachmann took to Twitter telling those who had welcomed refugees with applause at Munich's main station to immediately convene there, leading to widespread outrage and indignation across social media.

Later, he added in another tweet that he didn't understand all the commotion regarding his initial tweet - trying to combine the English word "refugee" and ISIS (another IS acronym) into a single hybrid: "You clapping morons wanted refugISIS in Europe! Why are you now peeing yourselves instead of going to the main train station in Munich?"