The Mandarin Oriental hotel in Munich wanted to make a style statement with a Christmas tree decorated with Fendi ornaments. But the idea backfired after animal lovers kicked up a storm on the internet. 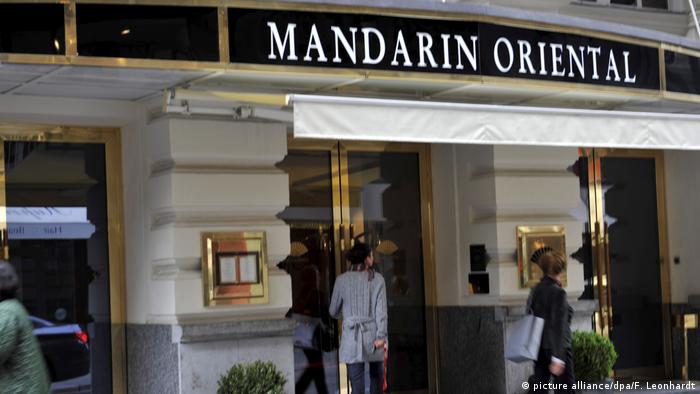 A picture in the daily Munich's daily "Abendzeitung" showed a Christmas tree in the city's Mandarin Oriental hotel lobby, trimmed with little fluffy balls made to look like pandas and other furry animals.

Together with the sparkling lights, the tree makes for a cozy, Christmassy image - or so the hotel had probably hoped.

The Kings of the Christmas Trees

The Mandarin Hotel attracted attention after journalists of the "Abendzeitung" published a report on the "fur" tree with its 200 fluffy decorations earlier this week. The tree was displayed at an event attended by prominent local celebrities. A spokeswoman for the hotel defended the lavish decoration, saying, "If I were to begin questioning the tree, I wouldn't be allowed to let any guest wearing a fur coat or leather shoes into the hotel."

The hotel said that as of Sunday, it would put a Christmas tree with "traditional" decorations back up in the lobby. In a statement on Facebook, the hotel seemed to deny any responsibility for decorating the tree.

"Earlier this week, an event was hosted at Mandarin Oriental, Munich by Fendi to present a Fendi-inspired Christmas tree to begin the festive season. The decorative style was the responsibility of the appointed design company and any enquiries relating to the design elements, should be directed to Fendi’s PR department...The Fendi tree has since been removed and...Munich's traditional Christmas tree will be showcased in the lobby."

Online, people reacted with outrage at the post, demanding that the hotel sincerely apologize for passing off animal fur as decoration.

"A tree with balls made out of real fur is a shame," one Facebook user wrote. Another complained about the use of fur and the apparent extravagance of the Christmas decorations. "If Munich's homeless or refugee children had Christmas balls for your [the hotel's] trees, you would be in a better position now," a Facebook member said. One user also promised not to set foot in the hotel ever again for its "tasteless" idea.

Fendi made sure its fur products were on the tree and under it.

According to the "Abendzeitung," reports that the hotel's employees are constantly deleting comments they consider detrimental to their image. "Obviously we do not want any disagreeable comments on our page," a hotel spokeswoman said, toeing the company's official line that Fendi was responsible for the decorations and all complaints should be directed at the Italian designer label.

Meanwhile, the incident has been christened "Pannenbaum" or "problem tree," to rhyme with "Tannenbaum," the German word for fir.

The Berlin luxury department store is being treated to a face-lift. At a cost of 180 million euro (192.6 $) it is to be made fit for the future. The first building phase will be completed in time for Christmas shopping. (16.11.2016)