Police warned that a march against the reported police framing of a journalist would be illegal. Protesters marched and were met with a heavy-handed response. 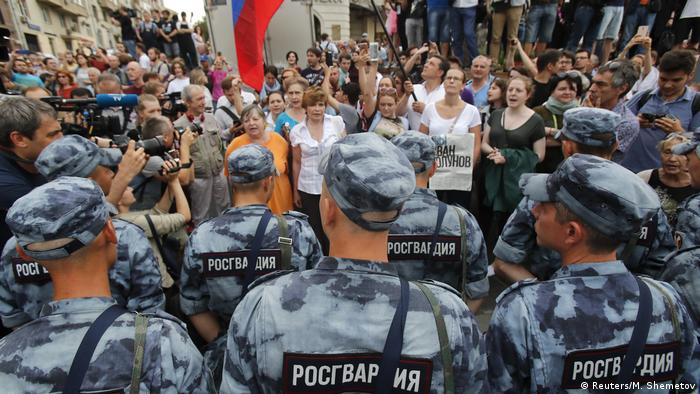 More than 400 people have been detained at a march in response to the arrest of the prominent reporter Ivan Golunov, according to OVD-Info, which monitors arrests of opposition figures.

Police in Moscow had earlier put the number detained at 200 and said charges could result in 20 days in jail.

Among those arrested was Alexei Navalny, the most prominent political rival of President Vladimir Putin. Navalny was released after several hours in custody.

The German newsweekly Der Spiegel reported that one of its producers was also arrested, despite carrying appropriate permits.

Golunov had been arrested last week on what press reported were trumped-up drug charges, but, in a rare U-turn by authorities, he was released Tuesday, following an unusually vocal backlash in Russia and internationally.

Golunov vowed to continue his investigative work into corruption and graft. 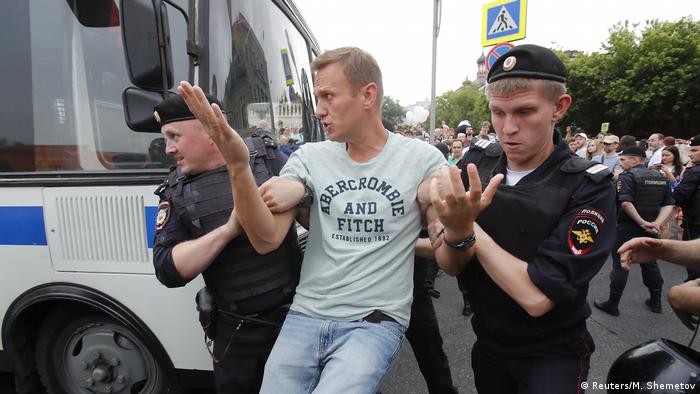 Opposition politician Alexei Navalny was among those arrested

Despite his release, witnesses said more than 1,000 people marched through central Moscow Wednesday, calling for police involved in the Golunov incident to be punished and chanting "Russia will be free."

Authorities had warned that the demonstration would be deemed illegal.

DW correspondent Emily Sherwin reported that a heavy police presence was in force to send a message.

A young man in a Golunov T-shirt told DW: "We came today because we want those who are guilty to be punished."

An older woman said: "Apart from what we achieved with Ivan a lot of other people are wrongly behind bars. It’s great that we got Ivan out, but that’s a drop in the ocean. We have to do something."

"If we do not show solidarity with each other, the system will break all of us one by one," Udaltsov said.

Another protester, named only by Reuters as Ivan, 28, said the freeing of Golunov did not amount to a victory.

"It was a tactical move by the authorities to prevent disorder breaking out today," he said. "But we came here anyway."