Doctors Without Borders reported that a fifth of children suffered from malnutrition at a camp for people fleeing Boko Haram. The militant group has killed over 20,000 people and displaced millions in the region. 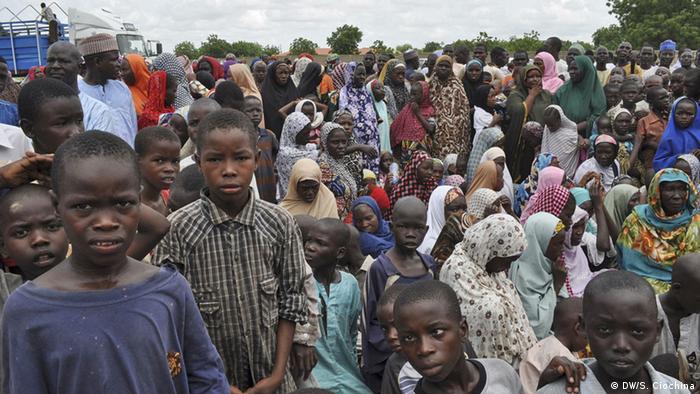 Doctors Without Borders (MSF) on Wednesday warned of a "catastrophic humanitarian emergency" unfolding at a camp in northeastern Nigeria sheltering refugees who fled the Boko Haram militant group.

Tens of thousands have fled violence in Bosso, where government forces are fighting Boko Haram. Chadian military sources said their troops will rendezvous with Nigerien forces before engaging the group.

"Since 23 May, at least 188 people have died in the camp - almost six people per day," MSF said in a statement, adding that the deaths were mainly caused by starvation and dehydration.

The aid organization said the camp hosts 24,000 people, including 15,000 children. Roughly one in five of over 800 children MSF examined suffered acute malnutrition.

"This is the first time MSF has been able to access Bama, but we already know the needs of the people there are beyond critical," said Ghada Hatim, the organization's head of mission in Nigeria.

"We are treating malnourished children in medical facilities in Maiduguri and see the trauma on the faces of our patients who have witnessed and survived many horrors," Hatim added. Maiduguri is the Borno state capital 70 kilometers (45 miles) to the northwest of Bama.

The Boko Haram militant group seized the municipality of Bama in September 2014. Government troops recaptured it following a major offensive in March 2015.

At least 20,000 people have been killed since Boko Haram launched an insurgency in 2009.

The conflict has displaced over two million people since the group gained control of large swathes of territory in northeastern Nigeria.

Boko Haram also launched an attack in Niger, where Chad has sent 2,000 troops to fight the group earlier this month.