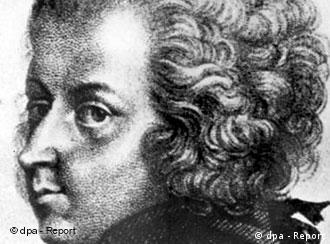 Two hundred and fifty years after the birth of Wolfgang Amadeus Mozart on Jan. 27, 1756, he's getting his own celebratory year. Throughout the next 12 months, events will be held feting the Austrian genius, who at three years of age was picking out chords on the harpsichord, at four playing short pieces and began composing at the tender age of five.

His parents, Leopold and Anna Maria Pertl Mozartis, gave him the name Johann Chrysostom Wolfgang Theophilus. His aptitude for music might have come partly from his father, a violinist and composer in his own right who was well known in Europe.

However, it soon became clear that the young Mozart had a talent that outstripped his father's and he embarked on a composing career that took him to courts and capitals around Europe. He spent a good deal of time in Germany.

Mozart's life, however, was fraught with financial difficulty and illness. Often, he received no payment for his work, and the small amounts he did receive were quickly consumed by an extravagant lifestyle. He died in Vienna in 1791; he was only 35 years old.

Mozart's tremendous creative output includes works that are pinnacles of symphonic, chamber, piano, operatic and choral music. Many of these are now part of the standard concert repertory and widely recognized as masterpieces of the classical style.

Read a selection of stories listed below from DW-WORLD about the commemorations of this giant of classical music.

From his beginnings as a child prodigy under the thumb of a demanding father to later year-long tours and an extravagant lifestyle, Mozart set the pop star bar high, even for today's standards. (Jan. 13, 2006)

Uncommon Genius for the Common Man

Wolfgang Amadeus Mozart will be feted worldwide this year. In an interview with DW-WORLD, Mozart expert Günther Bauer explains the undying fascination with the musical genius on what would have been his 250th birthday. (Jan. 27, 2006)

Mozart's aria "Cosi fan tutte", hip-hop beats and German rap don't usually go together. But a group of young performers in the German capital have updated the classic to mark the composer's 250th birthday. (April 6, 2006)

Two cities are especially important to the celebration of Mozart's 250 Anniversary, Salzburg and Vienna. But there is a city in Germany closely connected to his life -- Augsburg. (Jan. 14, 2006)