Authorities have roped in teams of soldiers and volunteers to help tackle wildfires in the Mount Kenya national park. Illegal marijuana farming has been blamed for the blaze, which threatens natural bamboo forests. 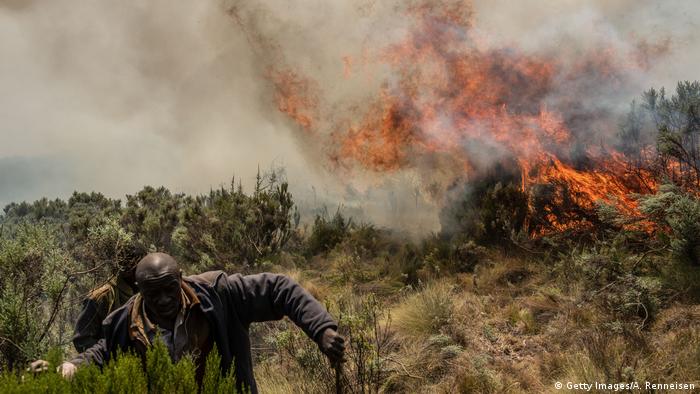 More than 80,000 hectares (200,000 acres) of forest land has been destroyed at the World Heritage site since the fires broke out a week ago.

Kenya's Wildlife Service (KWS), the government agency responsible for national parks, said in a statement on Saturday that it had "made good progress" in containing the fires. However, it noted reports of fresh outbreaks.

Other officials on the ground said the fires are still spreading at an alarming rate, and that firefighters faced challenges containing them due to high temperatures and changing wind direction.

Kenya's Forest Service (KDS) said 490 troops had been deployed to the worst-affected areas.

The Mount Kenya Trust charity said on Friday that hundreds of community members and volunteers backed up by an airplane dropping water had joined rangers and soldiers to beat out the fires. 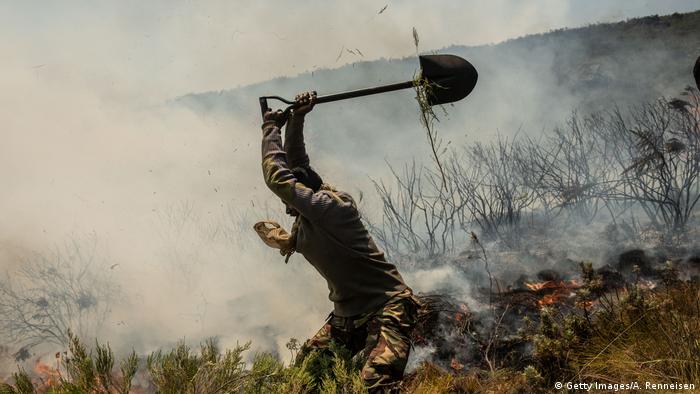 In a tweet, the trust described how a crop duster plane had extinguished three fire lines on Saturday, while teams had been conveyed by helicopter to the site of two other fires on the upper moorlands.

Row over who's to blame

Some local media reports blamed the fire on farmers clearing the area to plant illegal marijuana. The Nation newspaper cited MP Kareke Mbiuki (Maara) as calling for strict measures to keep "criminals" out of the national park.

Other officials have blamed local honey gatherers and residents who burned grass to kill ticks.

Plumes of smoke continued to be seen rising from the park on Saturday with large flames still visible among the vegetation and natural bamboo forest. Above, Africa's second highest after Kilimanjaro in Tanzania remained covered in ice and snow patches.

The national park, with a 5,199-meter (17,057-foot) high peak at its center, straddles the equator and is a key habitat for wild animals. The mountain is the main catchment area for the country's two main rivers.

British adventurer Charlie Mayhew, who runs the elephant conservation charity Tusk, tweeted that his organization had already sent $10,000 in emergency funds to prevent the fire's spreading further. He appealed for more donations.

Mount Kenya was hit by a similar fire at the same time last year following a prolonged drought.

Data profiling and restrictive laws threaten the Kenyan Internet community. Digital rights activist Grace Mutung’u spoke to us about attempts to rig an election and the next steps in protecting existing freedoms. (21.01.2019)

Explosion and shots fired at a complex in Nairobi, Kenya

At least 15 people have been reported killed in an attack on an upscale complex in Nairobi, Kenya claimed by Somalia-based extremist group al-Shabab. An explosion followed by gunfire was heard as the attack started. (16.01.2019)