The Cumbre Vieja volcano is not quietening down. Experts expect further violent eruptions. Lava and ash have destroyed houses and plantations, but in the long term, they will also promote new life. 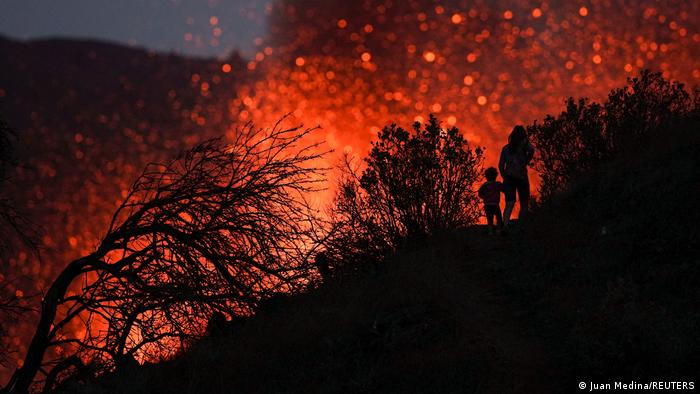 Anyone who lives on volcanic islands like the Canary Islands knows, or should know, how closely their formation and their exceptional fertility are connected with the dormant volcanoes underneath. And they should also be aware of the risk this entails: Those volcanoes can remain asleep for centuries or even millennia and then suddenly awaken.

Three weeks into the eruption on La Palma, the volcano of the Cumbre Vieja volcanic chain has become even more aggressive,  according to authorities. Experts expect further eruptions in the coming days. New fissures have opened on the mountain from which lava is escaping and flowing toward the sea. At the same time, the island has been shaken by more earthquakes, which also indicates that further volcanic activity is likely on the way.

Ten days after the initial eruption, the lava on La Palma reached the sea. While traveling the 6 kilometers (almost 4 miles) to get there, the glowing, hot lava masses spread over more than 470 hectares (1,160 acres) of land, destroying some 1,000 buildings and several roads. Six thousand people had to be brought to safety  — partly out of fear that toxic gases could develop.

Each eruption changes the island on which it occurs; layers of lava and ash cover large areas. Shortly after an eruption, nothing grows under the cooled lava flow. The initial effects of lava on marine flora and fauna are "devastating," said Fernando Tuya, an expert in biodiversity and environmental protection at the University of Las Palmas de Gran Canaria. Organisms buried under the lava will die immediately, he said. And it will take years or decades for new plants to reestablish themselves on the cooled lava.

For the economy of La Palma, with its 85,000 inhabitants, the volcanic eruption means heavy losses.

For example, the lava has destroyed numerous banana plantations, which are one of the Canary Islands' main sources of income. 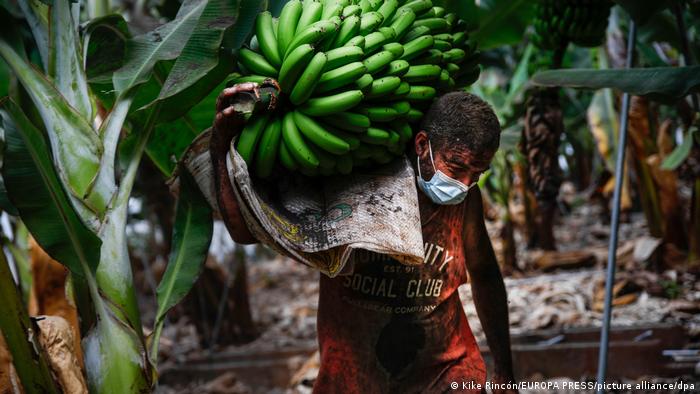 Harvesting before the lava arrives: Banana-growing is one of the island's main economic sectors, along with tourism

In addition, air traffic on the vacation island had to be suspended because of the volcanic ash. After four initial days of interruption, planes flew to the island again normally last week. But it may take quite some time for tourism to restart in view of the seemingly threatening images from the island that are still circulating.

Some 470 hectares of land have been buried under the lava. That's 658 soccer fields (which are often used for such comparisons). At the same time, however, the volcanic eruption has caused the Canary island to grow.

On the west coast, where the glowing lava has flowed into the Atlantic, a new area created by molten rock has already emerged. At the moment, it covers about 30 hectares, the equivalent of 300,000 square meters (360,00 square yards) or 42 soccer fields. But the area, and with it the island, continues to grow. 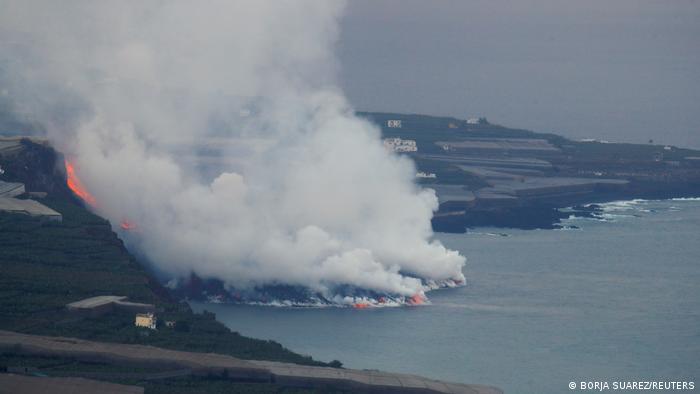 New land is emerging where the lava flows into the sea

And according to Tuya, after the initial negative impact the event could be "enriching" in the long run. "The lava will form a rock that will be a breeding ground for a number of marine species that will be able to colonize it in three to five years," Tuya said.

Newly emerging marine life may offer little consolation to the people who have now lost their belongings and livelihood. But there's a good reason why people keep settling at the base and on the slopes of volcanoes that are still active, accepting the risk of eruption.

This is because the lava makes the soil unusually fertile. The ejected ashes contain important plant nutrients.

Lava ash is rich in phosphorus, potassium and calcium, and it stores water. 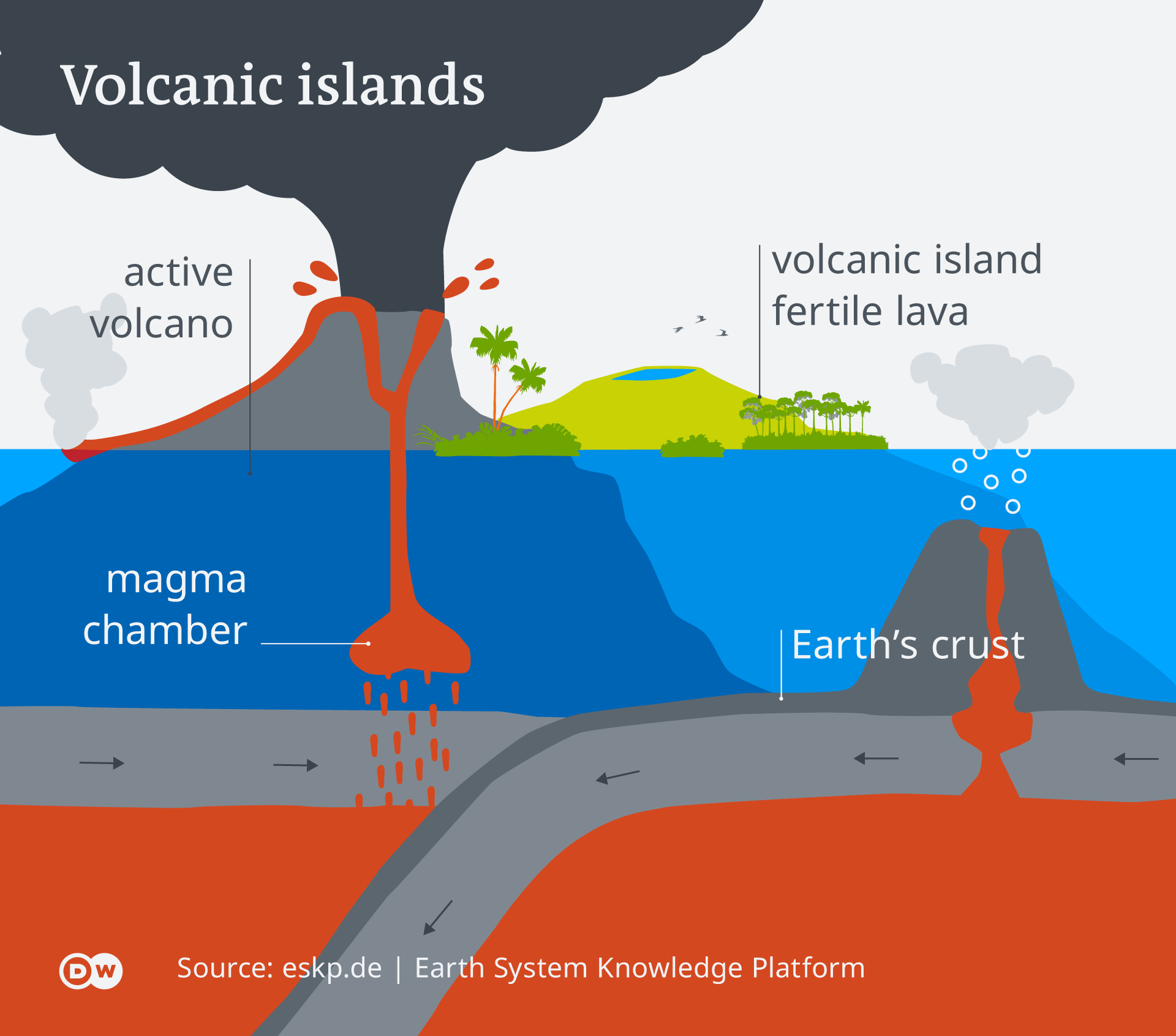 It won't take long for plants to find those nutrients. A thin layer of soil will soon form on the surface of the rock. The lava ash thus acts like a fertilizer that promises rich crop yields.

That is why there are huge banana plantations on La Palma. On about 3,000 hectares, more than 100,000 metric tons (110,230 US tons) of bananas are produced annually. This makes banana cultivation on La Palma one of the most important sectors of the economy, along with tourism.

Life on the hotspot

The Canary Islands were apparently formed by a "hotspot" in the Earth's mantle, which means that this layer between the crust and the outer core of the planet is at a particularly high temperature at this point. If the Earth's crust, here the African plate, rubs over such a "hotspot," a new volcano penetrates it. This happened about 2 to 4 million years ago about 4,000 meters (13,120 feet) deep in the Atlantic Ocean.

About 1.7 million years ago, the rising shield volcano reached the sea surface and gave rise to the island of La Palma as the second-largest Canary island. Even today you can see the two different volcanic complexes on La Palma. In the north lies the old, mighty shield volcano of the Caldera de Taburiente, and in the south the geologically much younger Cumbre Vieja volcanic chain that has now become so active.

Owing to the violent eruptions, the volcanic island is now 2,436 meters high at its highest point. That alone is impressive. But below the ocean surface, La Palma drops down 4,000 meters in the west. Thus, the entire volcanic complex, at a total height of more than 6,400 meters, is one of the highest volcanoes in the world.