Months ago, more than 20 Sei whales were reported stranded in Patagonia. Now, research in southern Chile has uncovered the full extent of the horror: It is possibly the worst disaster ever of its kind. 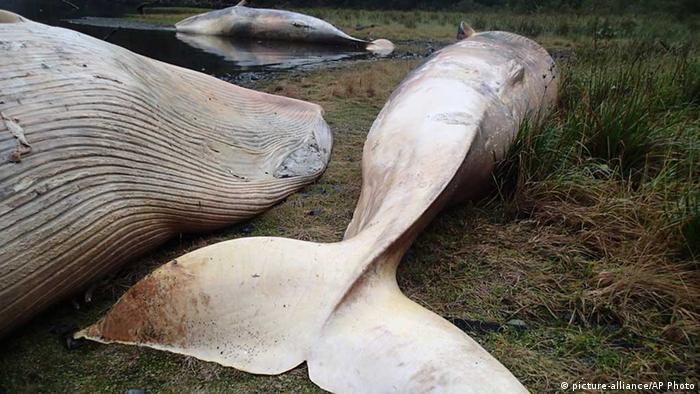 Researchers are calling it one of "the largest beachings of this kind" ever recorded: The coast of southern Chile has turned into a mass grave for more than 330 whales.

"It was an apocalyptic sight. I'd never seen anything like it," the director of the research center Huinay, Vreni Häussermann, now told the news agencies AFP and AP. She was part of an expedition that counted the dead whales.

More than 20 Sei whales, about 10 meters long (photo above), had been reported dead this past April, after they had beached on the northern part of the Gulf of Penas in Patagonia, almost 2,000 kilometers south of the Chilean capital of Santiago. Researchers - including Häussermann - in June flew over the area, which is difficult to access.

The analysis of their count, combined with photos and satellite imagery, has now revealed that the actual number of whales that died is much higher. "We were able to count 337 dead whales," said Häussermann, but added that there are still many areas the experts had not reached yet, so the number is probably even higher.

Häussermann did not want to comment in detail on the reasons for the whales‘ deaths, which are to be revealed soon in National Geographic magazine. No wounds were discovered on the carcasses, and the Chilean authorities ruled out direct human causes.

Häussermann merely stated that a first analysis revealed that all whales died "in the same event."

In spite of global outrage, Japan's whaling fleet has set out for the Antarctic to resume a decades-old whale hunt. Japan aims to take more than 300 whales in its "scientific whaling" program. (01.12.2015)

Even in a world awash with images, art still has the power to draw attention. But can it trigger social change? The PangeaSeed art collective hopes so. (24.11.2015)

A Frenchman who said "never again" after swimming across the Atlantic is taking to the waves once more - this time, to cross the Pacific. His goal is to raise awareness about environmental threats to the oceans. (24.11.2015)