Police in Hong Kong have arrested dozens of people as pro-democracy protesters returned to the city's streets for a second night. China has praised Hong Kong authorities for maintaining "stability." 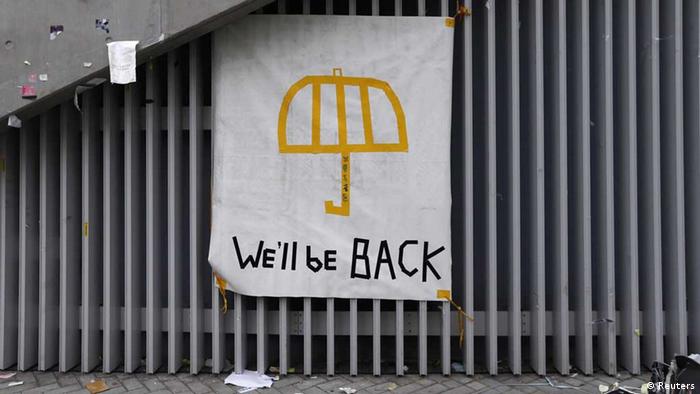 Protesters blocked five roads in the commercial Mong Kok district on Kowloon peninsula and refused to heed police orders to disperse, a police statement said. The statement said most of the arrests were over suspected criminal damage and causing "chaos and nuisance to the residents nearby."

Altogether 49 people have now been arrested over two days, in the first protests since authorities cleared the city's three major sit-in sites in November and earlier this month. Previously, protesters had held some ten weeks of pro-democracy demonstrations that caused wide disruption to life in the commercial center.

After the sites were cleared, activists said they would adopt "more fluid" forms of protest.

Protesters are calling for free nomination of candidates for Hong Kong's next leadership election in 2017. Beijing has refused to back down on its insistence that all candidates at the election in the former British colony be first vetted by a loyalist committee.

Chinese Premier Li Keqiang on Friday praised Hong Kong's authorities for not yielding to the protesters.

At a meeting in Beijing with the city's chief executive, Leung Chung-ying, Li reiterated the position of the central Chinese government, saying that "basic policy for Hong Kong has not changed and will not do so."

"During this year, I said the Hong Kong government was unafraid of difficulties and was united in struggle and steadily pushed on in their work and preserved overall stability in Hong Kong," he added in remarks shown on Hong Kong television.

Hong Kong was returned to China by Britain in 1997 under an agreement that envisaged a "one country, two systems" principle, theoretically granting the city a high degree of autonomy from the mainland.

China's Xi warns against pro-democracy protests on visit to Macau

Chinese President Xi Jinping has reminded Macau and Hong Kong that pro-democracy protests are not the way forward for both terrorities. He made the comment on a two-day visit to Macau. (20.12.2014)