Riot police used tear gas on protesters and dismantled barricades as the new church leader and the Serbian patriarch arrived by helicopter. Scores were reportedly injured in the clashes. 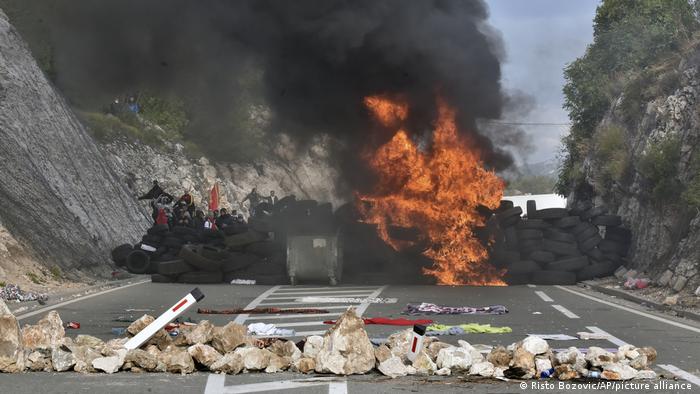 Riot police in Cetinje, Montenegro fired tear gas on protesters Sunday and dismantled barricades erected the day before in a failed effort by protesters to block the inauguration of the new head of the Serbian Orthodox Church in their country.

Hospital officials in Cetinje said at least 60 people were injured, including 30 police officers. At least 15 people were arrested.

Montenegro's state TV RTCG showed footage of Serbian Patriarch Porfirie and Bishop Joanikije arriving by helicopter at the monastery. The two were surrounded by heavily armed riot police who held up bulletproof vests to protect the two religious leaders, an indication of state involvement in their transport by helicopter as well as the discontent on the ground in Cetinje.

Joanikije was inaugurated as the top Montenegro cleric later on Sunday.

Why is the inauguration controversial?

Montenegro declared independence from Serbia in 2006. Since then, Montenegrins who are supportive of their nation's independence have backed the formation of a new Orthodox Christian Church distinct from the Serbian one.

Cetinje, the site of clashes over the weekend, is a former capital of Montenegro. The country's previous leaders led Montenegro into NATO membership in 2017, angering Russia and Serbia, which have since turned to the church for leverage over domestic politics in Montenegro.

Protesters clash with police in Montenegro

When did the protests start?

The situation turned volatile on Saturday as hundreds of protesters gathered to confront police around the Cetinje monastery in a bid to prevent Joanikije from officially becoming the new head of the Serbian Orthodox Church in Montenegro.

Protesters had set up barricades consisting of tires and trash bins and threw fireworks and bottles at police as they tried to block the main road to government and religious officials coming in for the inauguration. They chanted "This is not Serbia!" and "This is Montenegro!"

While the night was relatively quiet, some spent the night on the barricades.

How did the president and PM respond?

At the heart of the dispute over the inauguration are larger questions about what kind of country Montenegro is to be and what direction it wants to go in.

President Milo Djukanovic, who led the country into NATO, went to Cetinje and said he was not taking sides as he is president to all Montenegrins. But he also praised the protesters for safeguarding the national interest.

Though Djukanovic urged the inauguration be postponed, it went ahead on Sunday as scheduled as barricades burned.

The current pro-Serb Prime Minister Zdravko Krivokapic went to Podgorica, the capital, where thousands of people greeted Serbian Patriarch Porfirije and Bishop Joanikije before the inauguration. Krivokapic labeled the protests in Cetinje "an attempted terrorist act." At the heart of the dispute are bigger questions about the church, the state and independence in Montenegro

What was the reaction outside Montenegro?

In Serbia, President Aleksandar Vucic congratulated Joanikije on his inauguration and praised the government for proceeding with the event. Vucic told TV Prva in Belgrade that Serbia has "only the closest and best relations" with Montenegro.

Vucic has been accused of meddling in the affairs of Montenegro since the two countries split. He is a former information minister in the government of ousted Serbian leader Slobodan Milosevic, who led the country into two wars in the 1990s and whose actions helped popularize the term "ethnic cleansing."

The US Embassy, meanwhile, has put out a statement urging all sides to deescalate.

"Religious freedom and the freedom of expression, including to peacefully assemble, must be respected," the statement said.