A Ukrainian military plane carrying aviation school students burst into flames after crashing, killing 26 people on board. The cause of the crash is not yet known. 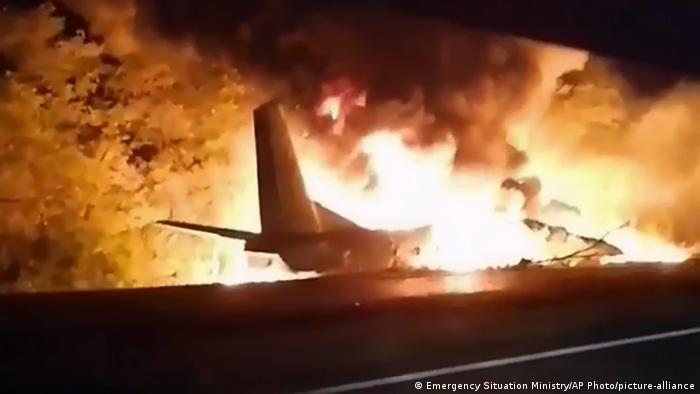 Only one person survived and was taken to hospital in a serious condition, officials said.

The plane, an Antonov 26, crashed while attempting to land at the airport in Chuhuiv, about 400 kilometers (250 miles) east of Kyiv and 2 kilometers from a military airport.

The town of Chuhuiv is around 30 kilometers southeast of Kharkiv and 100 kilometers west of the front line with the pro-Russian separatists.

Cause of crash uncertain

The cause of the accident was not immediately clear.

Defence Minister Andriy Taran said "the plane likely caught the ground with its wing" and caught fire after that.

"The flight recorder is now in the plane, after analyzing the information that is recorded there, it will be possible to draw conclusions," the Defence Ministry quoted Taran as saying.

According to reports, the plane had a military crew and most of the passengers were students at a Defense Ministry-run aviation university.

Ukrainian President Volodymyr Zelensky said he would travel to the region on Saturday.

"We are urgently creating a commission to investigate all the circumstances and causes of the tragedy," he wrote on Facebook.