Hillary Clinton has won enough delegates to lead the Democrats in the race for the White House. But Senator Bernie Sanders has vowed to take his campaign all the way to the Democratic convention.

Clinton reportedly wrapped up the nomination at the Democratic Party's presidential primary in California, the nation's most populous state, according to US networks.

In a speech in Brooklyn, New York, a few hours after winning the New Jersey primary, Hillary Clinton told her supporters, "We've reached a milestone, the first time in our nation's history that a woman will be a major party's nominee.

"Tonight's victory is not about one person. It belongs to many generations of women and men who have struggled to make this possible," she added.

The former first lady, senator and US secretary of state also said her Republican rival Donald Trump was "unfit" to be president.

Clinton is on course to be formally declared the party nominee at the Democratic Convention next month after winning primaries in New Jersey, New Mexico and South Dakota on Tuesday.

On Monday, The Associated Press said its delegate count showed Clinton had enough support to assure her the nomination. The AP tally suggested she had 2,383 delegates. But Tuesday evening's result means she will move past that number. 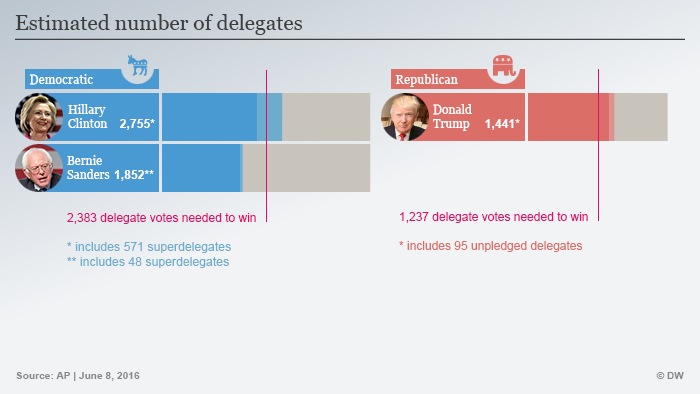 In separate phone calls, Obama "congratulated both candidates for running inspiring campaigns that have energized Democrats, brought a new generation of Americans into the political process, and shined a spotlight on important policy ideas," White House press secretary Josh Earnest said in a statement.

Obama also planned to meet with the Vermont Senator "at Sanders' request" on Thursday, the White House said.

Sanders vows to fight on

Despite a yawning delegate gap, Sanders appeared defiant on Tuesday, telling a crowd of supporters in California that he would take his campaign to the Washington, DC primaries next week.

"Then we take our fight for social, economic, racial and environmental justice to Philadelphia," he said, referring to where the Democratic convention will be held next month.

"I am pretty good at arithmetic, and I know that the fight in front of us is a very, very steep fight," Sanders said. "But we will continue to fight for every vote and every delegate we can win."

Sanders has energized the liberal wing of the Democratic party and younger voters, but his campaign has also highlighted fissures within the party as it heads for a faceoff with Trump.

In a clear sign the party is divided, Sanders supporters unleashed a long and loud boo when Sanders said he called Clinton to congratulate her on her primary wins on Tuesday.

According to polls, a between a fourth and a third of Sanders supporters said they would not vote for Clinton under any circumstance. Clinton also has low favorability ratings across the country. This could present a problem for Clinton as she faces off against Trump. 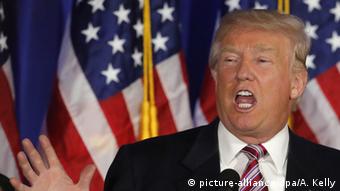 Giving a speech in New York at his Westchester golf course following the wins, Trump said he would "lead the Republican Party to victory" in the November 9 election.

He hit out at his likely sole opponent in the race for the White House, accusing Hillary Clinton and her husband, Bill, of "turning the politics of personal enrichment into an art form for themselves."

Trump, who is the only remaining candidate for the Republican nominee, also appealed to Sanders' supporters saying "we welcome you with open arms."

Hillary Clinton has captured enough delegates for her party's nomination, according to an AP count. She goes into the last big round of primaries as the presumptive Democratic nominee for president. (07.06.2016)

Opinion: US primaries - an ending without a winner

Even before the last batch of key polls in six US states, due to so-called super delegates, Hillary Clinton has enough support to become the Democrats' presidential candidate. But hold the champagne, writes Ines Pohl. (07.06.2016)

Will Donald Trump respect tradition with a concession speech? 07.11.2020