Despite rising international outrage, Thailand, Malaysia and Indonesia have signaled that they will not allow migrant boats to their shores. Meanwhile, Myanmar has refused to shoulder the blame on the crisis. 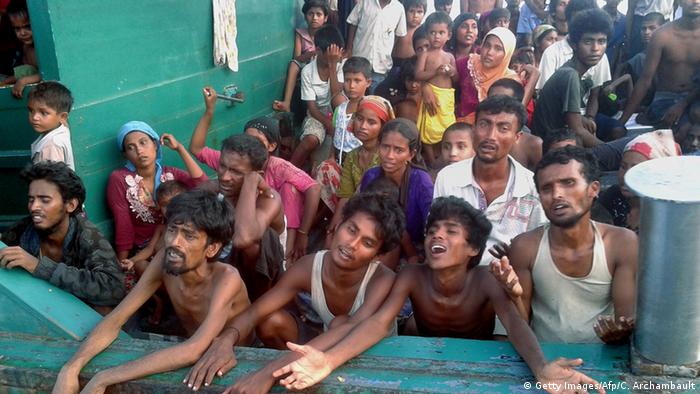 A boat packed with migrants was towed out to sea by the Thai navy and then held up by Malaysian vessels on Saturday, the latest round of "maritime ping-pong" of migrants being denied access to Asian states, the Reuters news agency reported.

The United Nations has called on countries around the Andaman Sea not to push back the thousands of desperate migrants and to rescue them instead.

Myanmar: 'It is not our problem'

Myanmar's government placed the blame for the ongoing migrant crisis on its neighbors. It also expressed doubt on whether it will attend a meeting to be hosted by Thailand on May 29 aimed at discussing the sea migrants and easing the humanitarian emergency in the Bay of Bengal.

Maj. Zaw Htay, director of the office of Myanmar's president, told the Associated Press on Saturday that Myanmar will decide whether to attend the meeting based on what is up for discussion. According to the news agency AFP, Myanmar's government has already rejected the Thai call for regional summit, saying the migrant crisis was not their problem.

He said his country "will not accept the allegations by some that Myanmar is the source of the problem," AP quoted him as saying.

Also Malaysia's Prime Minister said on Saturday he would seek help from Myanmar to address the "humanitarian catastrophe," AFP reported.

Many of those on board the boats are Rohingya Muslims fleeing persecution and oppression in the mainly Buddhist Myanmar. Others are Bangladeshis, who are mainly believed to be economic migrants.

Both groups seem to intent on reaching Malaysia, a Muslim-majority country that has hosted more than 45,000 Rohingya over the years but now says it cannot accept anymore. Indonesia and Thailand have voiced similar positions on this issue.

Thailand, Indonesia and Malaysia have all their navies stationed in boats at maritime borders to push boats away or conduct a so-called "help-on" policy of providing the boats with food and water and then pointing them to other countries.

Mahmud Rafiq, a 21-year-old Rohingya man who left Myanmar a month ago, recounted how an Indonesian navy ship had given them food and medicine before towing their boat to Malaysian waters, where they were again stopped, given supplies and taken right back.

Boats filled with more than 2,000 desperate and hungry refugees have arrived in Thailand, Malaysia and Indonesia in recent weeks.

The UN refugee agency has reported a surge in departures from Bay of Bengal ports in recent months. Activists say 8,000 people may be adrift on overcrowded vessels.

Southeast Asia's refugee crisis had been looming for some time. Still, the countries in the region failed to act. DW's Rodion Ebbighausen says a common approach is urgently needed. (15.05.2015)