Migrant workers clash with locals in southern China | Asia | An in-depth look at news from across the continent | DW | 26.06.2012

A rights organization has reported that at least 30 people have been injured in southern China in clashes between migrant workers and locals of Shaxi town. 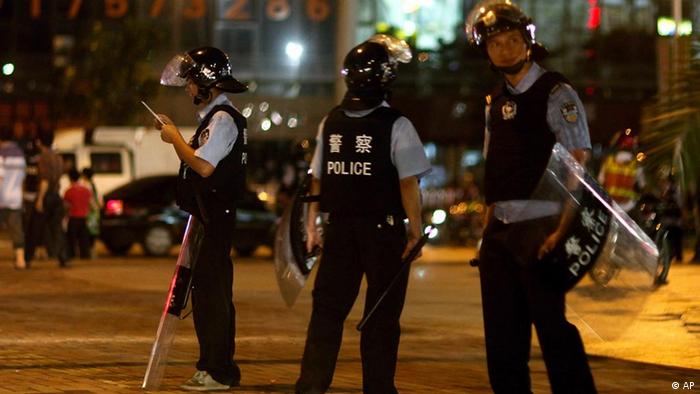 The Information Centre for Human Rights and Democracy, a rights group, said on Tuesday that scores of people had been injured when police attempted to break up clashes between migrant workers and Chinese locals in Guangdong province's Shaxi town.

China's Guangdong province is located next to Hong Kong, and is also known as the "world's factory floor." In recent decades, millions of migrant workers have moved to this area in search of job.

The rights group said the Monday's unrest started after a fight broke out between a migrant youth and a young local man.

"There were lots of riot police outside last night, and there are still many outside now. More than 30 people were injured," said Liu Tianjin, a Shaxi factory worker.

Chinese officials have confirmed the unrest.

"We are now working on it, a local policeman told AFP on condition of anonymity. “There are many police officers posted outside the Shaxi government."

In recent years, unrest among migrant workers in China has sharply increased. Many migrant workers complain of discrimination and unequal treatment by local authorities.

In November last year, more than 7,000 workers staged a protest over wage cuts and layoffs at a Guangdong factory manufacturing Adidas and Nike shoes.

Human rights organizations complain about the inhuman treatment of migrant workers in Chinese factories in many parts of China. Last month, about 1000 workers protested against the government in the wealthy Zhejiang province after a worker was apparently killed by his employer.

Foreigners in Beijing are bracing for a clamp down on illegal workers in the Chinese capital, but the sweep could be aimed at journalists. (16.05.2012)

Workers who make iPhones and iPads at Foxxconn factories in China are often overworked and underpaid, a landmark report has found. The Apple partner has pledged to tackle all workplace violations. (30.03.2012)

After being found hanged in a hospital in central China, activists demand to know what really happened to the 62-year-old who saw it as his mission to fight for the democratization of his country. (08.06.2012)