As Mexico's drug war continues, more and more people are seeking help from self-defense groups. DW's Tobias Käufer spoke to people in one of the areas most afflicted: the state of Michoacan. 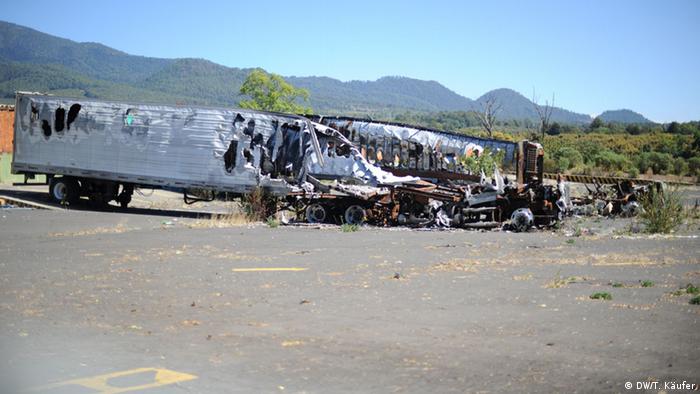 The burned-out vehicles at the city limits are evidence of the latest protests. Here, in the state of Michoacan, Mexico's drug war has taken a particularly devastating toll. Last year, a massacre in Apatzingan made international headlines. The police shot 16 people who had been demonstrating peacefully. Witnesses say officers shouted "Kill them like dogs" and opened fire.

The massacre has caused people in this state west of Mexico City to lose all faith in official institutions. "The government has always been against us," Jose, a 52-year-old digger of wells, told DW. "Always." For this reason, he has joined up with the "autodefensas": groups of people protecting people. "I do not like carrying weapons on me," Jose said. "I would rather dedicate myself completely to work. But we have to do this. Otherwise, no one will protect us." He feels that the police, the justice system and local governments are in cahoots with the drug mafia. "There are governments that are like vampires to me," Jose said. "And vampires shy away from light - meaning transparency. They prefer darkness."

Jose and his collaborators go on patrol at dark. They want to protect their community, which is situated near the state capital, Morelia. "We use our own, normal vehicles for the patrols," Jose said. "In every community, there are three people who are responsible for organizing the routes and the controls."

Backing from the community

People in the community, even people who work for the Catholic Church like 58-year-old Rita, support Jose and his companions. "What we want above all is peace," she said. "The barricades we have erected help us keep violent crime away from our village. Thank God for the self-defense forces. Do you know what it is like to see a 12-year-old girl crying at home, in fear of going out on the street because she saw someone holding a weapon to her father's head? That is the reason we have these groups." Rita said the self-defense groups had restored a semblance of peace: "We can go out on the street again. We want our freedom back - the kind of freedom in which our decisions and votes mean something and are respected."

According to Mexico's government, self-defense groups undermine the authority of the state and create a second justice and administration system. Some officials even accuse self-defense groups of allying with drug gangs. "As soon as we sense that there is no more corruption in government and that it is doing honest work," Rita said, "we will cooperate again." Michoacan is not a place of peace and justice for now.

Nationwide, the drug war has left more than 70,000 people dead since 2006, and thousands of others have gone missing. Corruption within the security forces and in the justice system is a grave problem for the government of President Enrique Pena Nieto. After letting the drug lord tunnel out of a maximum-security prison, the government did manage to recapture Joaquin "El Chapo" Guzman. But it is highly unlikely that the arrest will help restore faith in government institutions.

Jose Raul Vera Lopez, a Catholic bishop and human rights activist whose work is supported by the German organization Adveniat, has accused the government of complicity in organized crime and of exploiting the situation to justify police control over people and to reinforce existing power structures. He has called for a new constitution to reorganize those structures.

Pope Francis' trip to Mexico is a dangerous mission: a diplomatic as well as political balancing act, one that brings with it enormous expectations. Francis won't be able to meet them, says DW's Astrid Prange. (12.02.2016)