The billionaire philanthropist and former New York mayor has taken steps to allow him to run as a Democrat in the 2020 US presidential elections. He fears none of the current candidates can beat President Donald Trump. 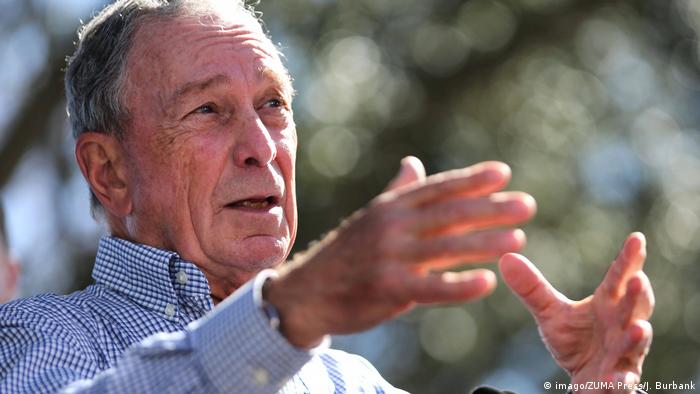 A political adviser for Michael Bloomberg tweeted on Thursday that the former Democratic mayor of New York City is considering running for president in the 2020 US elections.

In a five-tweet statement posted on Twitter, Bloomberg adviser Howard Wolfson said the 77-year-old is concerned that none of the current Democratic candidates can defeat President Donald Trump.

"Mike is increasingly concerned that the current field of candidates is not well positioned," Wolfson said.

Bloomberg said in March that he would not run in this election cycle and would instead offer financial support to candidates and causes of his choice.

He has considered running for president in past elections, including the 2016 election that saw Trump elected, but has thus far abstained.

His candidacy would add to the already crowded field of 17 contenders for the Democratic presidential nomination. It would also pose a significant threat to centrist frontrunner and former Vice President Joe Biden, who has faced increasing competition from progressive candidates Elizabeth Warren and Bernie Sanders.

Bloomberg served as mayor of New York City from 2002 to 2013. As chief executive officer and founder of the financial, tech and media giant Bloomberg L.P., he has built up significant wealth, much of which he has thrown at philanthropic causes like gun control and the fight against climate change.

A Republican-turned-Independent-turned-Democrat, he is considered socially liberal and business-friendly — positions that could attract voters who find Biden too weak and Warren and Sanders too progressive.

"If Mike runs, he would offer a new choice to Democrats built on a unique record running America's biggest city, building a business from scratch and taking on some of America's toughest challenges as a high-impact philanthropist," Wolfson said in the statement.

Bloomberg has not yet made a final decision on whether to run, but has kept the option open by taking steps to get on the primary election ballot in Alabama ahead of the Friday deadline.