The incoming head of state will take home a much smaller pay packet than his predecessor as part of a government cost-cutting drive. Mexico's first leftist president in decades has also vowed to fight rampant corruption. 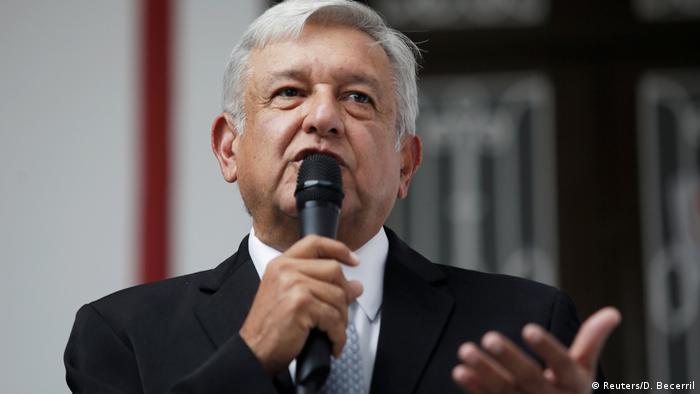 Andres Manuel Lopez Obrador has vowed to slim down Mexico's bloated government budget by taking a massive pay cut when he takes over as president in December.

"What we want is for the budget to reach everybody," he told reporters on Sunday.

Left-wing Lopez Obrador, who is also known as AMLO, says he wanted to reduce his salary even further, but decided against it so as not to breed resentment among future Cabinet members who often leave high-paying jobs to serve as ministers.

He is determined, however, that no public official will take home more than the president in future. Perks such as chauffeurs, bodyguards and private medical insurance for high-level officials are also to be curbed.

AMLO also wants to tackle corruption by forcing public officials to disclose their assets and making corruption a serious offense. On Transparency International's 2017 Corruption Index, Mexico languishes at 135th place, with 180 countries on the list.

AMLO and his Morena party garnered 53 percent of the vote in the July 1 elections. He is the first left-wing Mexican president in decades. He won on a platform that focused on fighting poverty, corruption and violence.

With Trump in the White House, US-Mexican relations have plummeted to abysmal depths. But with the two countries' fates intertwined, observers say Mexico has the means to stand up to its powerful neighbor in the north.  (01.07.2018)

Larry King: Legendary US TV host dead at 87 19m ago