Striking teachers in Mexico have stormed the offices of four political parties, smashing windows and setting fire to the ruling party's local headquarters. They have been angered by recent state education reforms. 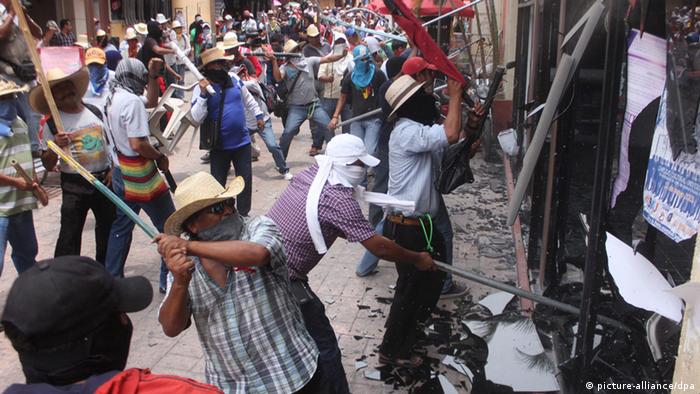 Masked protesters broke into the state headquarters of the ruling Institutional Revolutionary Party (PRI), setting fire to the building and tossing chairs, papers and plants out of the windows.

The local headquarters of the National Action Party (PAN), the Democratic Revolution Party (PRD) and the Citizen Movement were also attacked, with protesters destroying windows, doors, computers and furniture.

No injuries were reported.

Under a new law, passed by the federal Congress in December, teachers will be required to pass periodic tests to get jobs and promotions. The law also seeks to remove control over recruitment and dismals from the teachers' union, the CETEG.

Wednesday's protests came a day after the Guerrero state legislature approved a similar education law in spite of teacher's demands for alterations.

Minervino Moran, a spokesman for the CETEG teachers' union, said the attacks were "a reaction to the aggressive policies that are being imposed by the reforms." He said protesters took action against the parties that had voted against the protesters' demands.

"We as leaders and as a movement endorse these actions because there is a lot of anger, a lot of outrage with the decision the [state] congress made," Moran said.

He added that the demonstrations "could escalate, but it is up to the government and the legislature to find a solution."

In a tweet Guerrero state Governor Angel Aguirre said prosecutors had issued arrest warrants for Moran and another union leader because they were the "masterminds of the acts of vandalism."