A private clinic in northern Mexico was found offering fake coronavirus vaccines for up to $2,000. Experts have long worried about criminal gangs attempting to counterfeit vaccines. 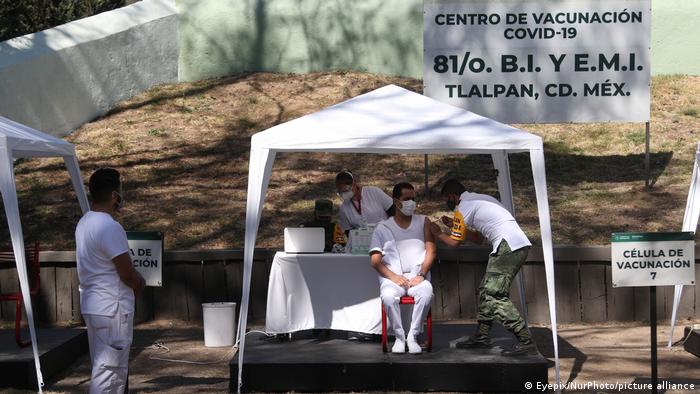 "We have direct evidence that fraudulent vaccines… were sold for up to 40,000 pesos (around $2,000) per dose," said Assistant Health Secretary Hugo Lopez-Gatell at a press conference.

The fake shots were presented as BioNTech-Pfizer vaccines, which are only available in Mexico through government vaccinations teams, he said.

Authorities found a private clinic offering fake vaccines for sale in the city of Monterrey, in the border state of Nuevo Leon.

"The seizure of fake vaccines was carried out in Nuevo Leon, a fact that we regret because the use of this type of apocryphal immunizations puts the health of the population at risk," said Mexico's Public Safety Secretary Rosa Icela Rodriguez.

"You don't play around with health, and in these moments of the pandemic, nobody should be profiteering," Rodriguez said.

She further urged people to only visit government vaccination centers and report any business, hospital, or internet site offering vaccines to authorities.

He added that no private entity had been authorized to purchase COVID-19 vaccines from abroad for commercial purposes and that the shots were only administered by the government free of charge.

Experts have long worried about the criminal gangs in Mexico attempting to steal, hijack, or counterfeit vaccines or medications during the pandemic.

While oxygen tanks and medicines have been stolen in the past, this was the first reported instance of criminal activity related the vaccines.

Mexico began its vaccination drive on December 24, starting with medical personnel and a small number of teachers in the east of the country.

Last Monday, it began inoculating people over 65 years of age.

While the country has administered over 1 million coronavirus vaccines so far, it has not yet fully vaccinated its 750,000 front-line health care workers.

Coronavirus: Tourism thrives in Mexico against the odds

2020 was a disastrous year for tourism. But with some exceptions: in the midst of the pandemic, Mexico ranks third among the world's most visited countries, after Italy and France.

The Mexican wolf was hunted to the brink of extinction. But as it is reintroduced, conservationists hope to quell the old enmity between 'el lobo' and the farmer.