Running for the third time, Andres Manuel Lopez Obrador is capitalizing on the current Mexican government's wave of unpopularity. 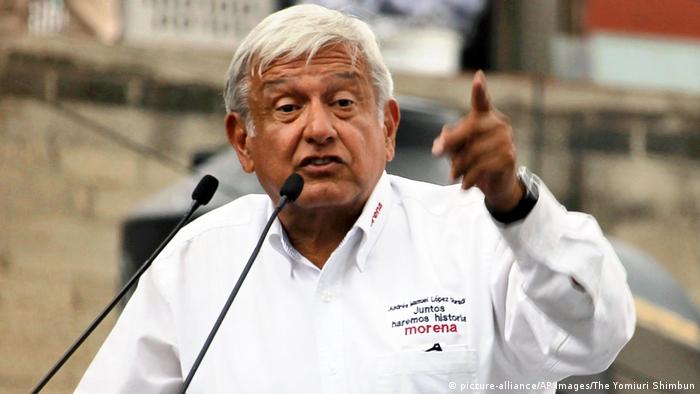 Andres Manuel Lopez Obrador, known as AMLO, has extended his lead in the latest opinion polls to nearly 17 points ahead of his nearest rival, three weeks before the presidential election on July 1.

During his campaign, he has spoken of plans to work on a deal with US President Donald Trump similar to the "Alliance for Progress" launched in 1961 by former President John F. Kennedy, which would tackle the thorny issue of migration to the north. "Our dream, which we'll achieve regardless of whether Trump accepts or not, is that Mexicans can work and be happy where they were born," Lopez Obrador said during a rally on Sunday.

AMLO is the candidate for Juntos Haremos Historia, (Together We Will Make History), a coalition between the left-wing Labor Party, right-wing Social Encounter Party and National Regeneration Movement (MORENA), which he also founded in 2014.

AMLO is proposing a program of increased financial aid for students and the elderly, amnesty for some drug criminals, better access to education, possible return to state involvement in the energy sector, agricultural development and the cancellation of a new international airport project in the capital, Mexico City.

Lopez Obrador has also said Mexico should do more to solve its own problems, including fighting corruption and violent crime. 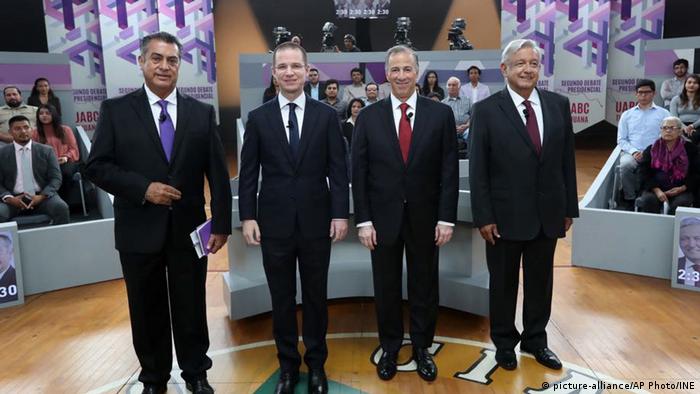 Running for the third time, the 64-year-old AMLO has registered 37 percent support, up from 32 percent in May, according to a poll published Sunday by polling firm Consulta Mitofsky.

Ricardo Anaya of the center-right National Action Party (PAN), who is fronting a right-left coalition, saw his support fall back slightly from 20.5 percent to 20.3 percent.

Mexico's election campaign has been the most violent in decades. On Friday, a congressional candidate for the ruling PRI, Fernando Puron, was shot in the back of the head as he spoke to supporters in the border city of Piedras Negras. His death brought the number of candidates, politicians or office holders killed since campaigning began last September to 112.

Lopez Obrador, who is well-versed in Mexican history, has responded to voter concerns over another major issue: endemic corruption.

He has said his focus will be on preventing graft in the future, rather than targeting members of the outgoing administration of President Enrique Pena Nieto and his PRI party.

Lopez Obrador's attitude toward corruption appears to have gathered some dissatisfied ruling party members to his side, and may give him a majority in Congress as well.

On Monday, The New York Times suggested the government had enough evidence to charge officials accused of links to the Odebrecht corruption scandal, but said it had not brought charges as they might hurt the PRI ahead of the elections. Odebrecht is the Brazilian construction giant at the center of region-wide political scandals.

In addition to the presidential and congressional votes, elections are being held at nearly all levels of administration throughout Mexico down to the municipalities, where corruption remains the main theme.

The youngest candidate standing in the July elections, 18-year-old Paola Gonzalez who is part of AMLO's alliance, has been criticized for her lack of political experience. She agreed, saying however: "I don't have experience in stealing and corruption."

Edgar Valdez Villarreal, a Texan whose blood-soaked rise to power saw him make it to the top ranks of one of Mexico's most vicious drug cartels, has been sentenced to spend the rest of his life in a US prison. (12.06.2018)

Mexico files WTO complaint over US steel and aluminum tariffs

The move follows Mexico's announcement that it would introduce retaliatory duties on US products. The European Union and Canada have already filed WTO complaints over the controversial steel and aluminum tariffs. (08.06.2018)

Gunmen have shot and killed a Mexican radio journalist while he was leaving his home in the southern state of Tabasco. He is the fourth journalist to be killed this year as homicide rates continue to rise in Mexico. (16.05.2018)