Bayern Munich put up a brave fight in the first leg of their Champions League semifinal in Barcelona. But they lost 3-0, undone by two late moments of skill by Lionel Messi and a last-minute goal by Neymar. 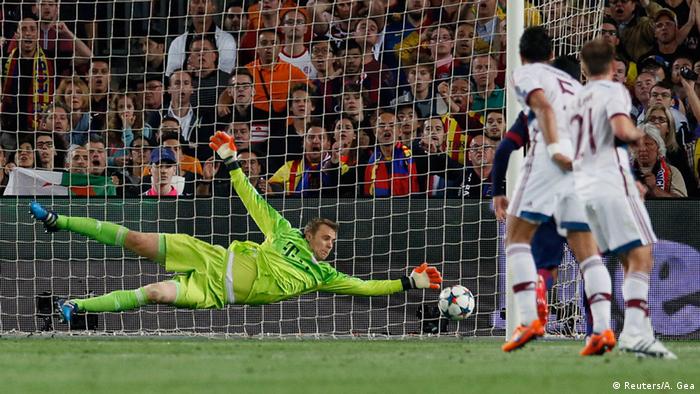 Barcelona came into the match against injury-decimated Bayern looking not just to lay the groundwork for a trip to the Champions League final, but also to avenge a 7-nil aggregate humiliation at the hands of the Bavarians in the competition two years ago.

And Barca were switched on from the first minute. The first major chance came in after 11 minutes, when Luis Suarez exploited a failed offside-trap. Bayern keeper Manuel Neuer made a huge right-footed save from the one-on-one to avoid an early deficit.

Three minutes later it was down to luck that a close-range shot by Neymar ricocheted wide. By that point, Bayern were ceding the majority of possession to the Catalonians and thumping the ball away to safety at numerous opportunities.

In minute 17, Thomas Müller issued a reminder of Bayern's qualities by finding an unmarked Robert Lewandowski in front of goal, but the Polish striker, playing with a mask after breaking his jaw and nose, skewed his effort wide. 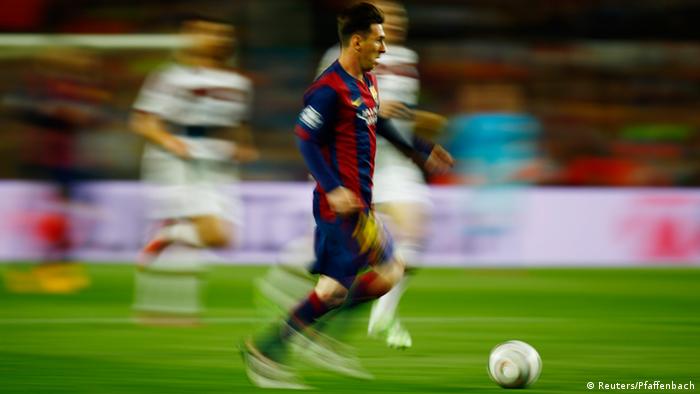 Messi's fleetness of foot was on display all evening

Bayern coach Pep Guardiola switched from a three-man to a four-man back line, which proved better in containing Lionel Messi, Neymar and Suarez, who saw a header from a corner go just over after 26 minutes. Five minutes from time in the first half, Neuer needed another deft foot save to deny defender Dani Alves.

Bayern's defense was bending but not breaking, and the half-time whistle sounded with the match goalless.

Munich took a slightly more offensive approach in the second half and were very nearly rewarded right off the bat. Alves tugged down Lewandowski just centimeters outside the area, but the resulting free kick came to nothing.

It wasn't until the hour mark that Barca reestablished control, with Neymar getting in behind Bayern's back-line. But Neuer, in his role as "sweeper keeper," came well out the penalty area to defuse the situation. 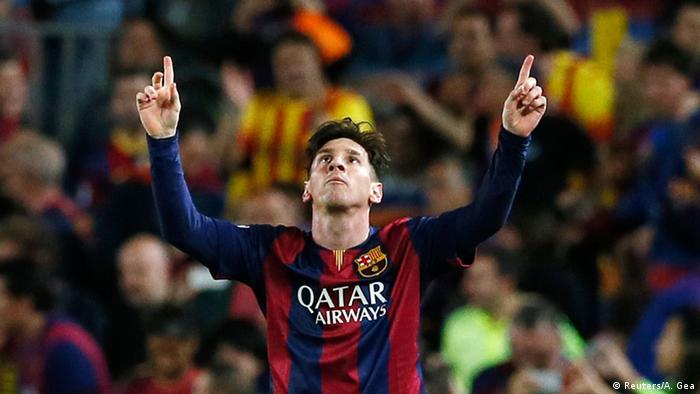 Bayern were winning many challenges (Bastian Schweinsteiger's percentage was less than ten), but they were getting the job done when it counted. Then came the last quarter of the game.

Ahead of the match, Guardiola had warned that Messi could not be stopped, and the diminutive Argentine proved him right, rifling in a perfectly placed low shot from just outside the penalty area.

And just before the 80th minute, Messi was at it again, sprinting past Jerome Boateng and lobbing an onrushing Neuer. Suarez could have added to Bayern's misery a short time later, but the Uruguayan didn't have his scoring boots on.

Bayern pressed for a valuable away goal, but came up blank. And Neymar completed the final scoreline with a break-away strike in injury time. The 3-0 win leaves Barcelona with one foot in the door to the Champions League final in Berlin on June 6.

Going into the return leg next Tuesday in Munich, Bayern will console themselves with the fact that they overturned a two-goal deficit against Porto in the quarterfinals. But pulling three back against Barca, without the benefit of an away goal, looks to be a near impossible task.

As it happened: Barcelona vs. Bayern Munich

Juventus grabbed an early advantage in their Champions League semifinal with a 2-1 win over Real Madrid, who looked strangely lethargic at times. The decider was a second-half penalty by the man of the match. (05.05.2015)