Juventus grabbed an early advantage in their Champions League semifinal with a 2-1 win over Real Madrid, who looked strangely lethargic at times. The decider was a second-half penalty by the man of the match. 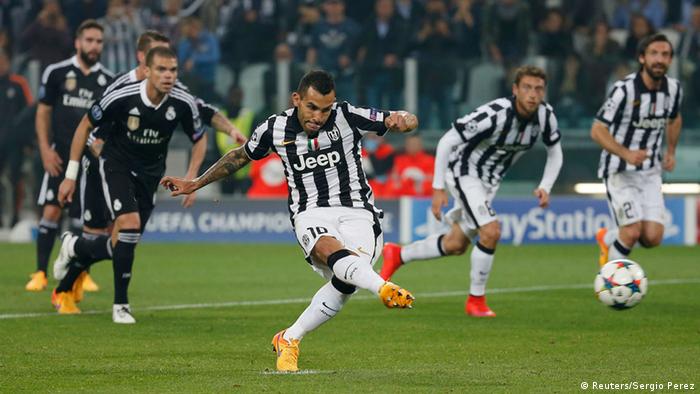 Juventus put paid to any thoughts they might come out defensively with a furious start to the match, while Real's defense often looked a bit sedated, especially when Carlos Tevez ran at them.

Only eight minutes had elapsed when the Old Lady's zeal paid dividends. Tevez was the creator, lashing a shot that veteran keeper Iker Cassilas could only parry onto the foot of Alvaro Morata. The 22-year-old ex-Real player made no mistake against his old team, and the hosts were ahead.

Juventus were the better side but failed to add to their lead and were lulled down to Madrid's level. Out of nowhere, the visitors leveled in minute 27. James penetrated down the right and lobbed in cross for Cristiano Ronaldo to nod in from point-blank range.

And Real could have taken the lead four minute before half-time, but James' header rattled the bar. Juventus could count themselves lucky to be able to take a draw into the dressing rooms.

The second half began with a flurry of fouls and not much else. Shortly before the hour mark, a long rebound from a Marcelo shot launched Juve on the counter attack. Dani Carvajal brought down Tevez in the box, and the Argentinian forward was cold as ice from the spot.

Juve seemed to run out of gas after that, and as the match wore on, the hosts began to pack it in more and more densely at the back. Real had no answers, with neither Ronaldo nor Toni Kroos nor Gareth Bale seeing a way through the black-and-white bodies.

Juve had a late chance to extend their lead, but Cassilas remained alert on a short-range Fernando Llorente header. The match ended 2-1, leaving the tie still very much up for grabs.

The two sides face off in the second leg next Wednesday in Madrid.

Bayern braced for test of champions

To reach the Champions League final, Bayern Munich will have to stop Barcelona's attacking force. Germany's head coach believes they can progress, but Pep Guardiola says they need an away goal. (05.05.2015)

Javier Martinez: "We want to lift the trophy"

After 253 days out injured, Javier Martinez is back on the pitch. And his first task is a mammoth one: stopping Barcelona in the Champions League. DW talked to the 26-year-old about his timely return. (05.05.2015)