The German chancellor has said bringing western Balkan countries into the EU would be in Germany's "geo-strategic interest." Six countries in the region are at different stages on a path to membership. 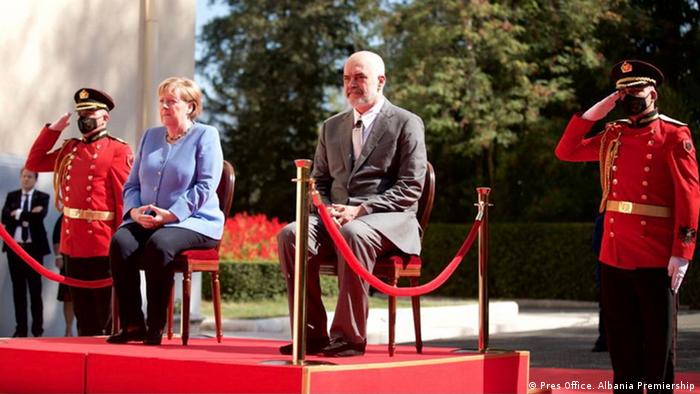 During a visit Tuesday to the Albanian capital, Tirana, German Chancellor Angela Merkel urged the leaders of six western Balkan countries to work together closer as they strive to gain European Union membership.

"The more cooperation you have, the stronger the Berlin Process will be," Merkel said, referring to the program she started in 2014 to promote regional cooperation among the six countries.

Merkel also sought to assure that whoever is elected as Germany's new chancellor at the end of September will continue to support the region's integration.

"Regardless of how the German election turns out, any new German Chancellor will have a heart for the region," Merkel said at a press conference with Albanian Prime Minister Edi Rama.

Rama said that Merkel will be missed in the region, adding that the outgoing chancellor had "set a milestone for decades to come."

Merkel wrapped up a two-day visit in Tirana after visiting Belgrade, Serbia, on Monday, where she outlined the challenges for Balkan countries in joining the EU.

What is the status of Balkan states' EU membership?

Albania, Bosnia, Kosovo, North Macedonia, Serbia and Montenegro are at different points in the process toward EU accession.

According to EU law, applying for membership includes satisfying conditions relating to EU values including human rights and rule of law. The process often takes years, as a candidate's "institutions, standards and infrastructure" must "enable it to meet its obligations as a member state."

The progress of the six western Balkan countries in question has also been stalled in recent years by waning EU interest in enlargement in light of Brexit.

"The EU must keep its word and not always come up with new conditions again and again because it doesn't have any interest … perhaps due to domestic reasons in some countries … to push forward the process of accession," Merkel said Tuesday.