Merkel: 'We've got it under control'

Germany's chancellor has defended her government's policy change with regard to refugees in a TV interview. Without detailing a specific plan, Merkel insisted that the government could handle the crisis. 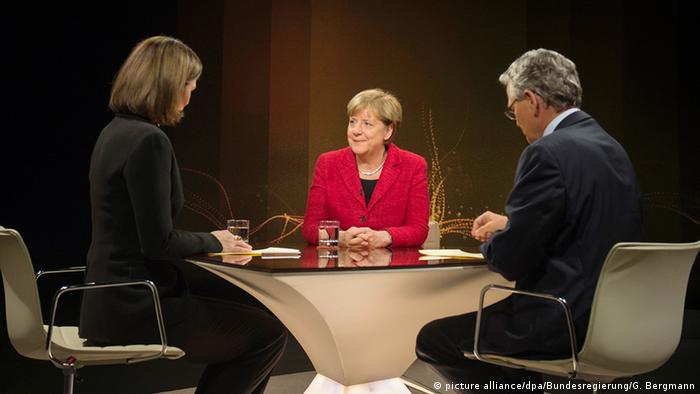 German Chancellor Angela Merkel appeared on national television on Friday evening to answer questions about what has been seen as her flip-flopping stance on the unprecedented influx of refugees arriving in Germany. The special program, entitled "What now, Ms. Merkel?" featured questions submitted by viewers and focused on the government's reintroduction of the Dublin Regulation.

The Dublin Regulation requires refugees to apply for asylum in the first European Union country they arrive in. Merkel suspended this rule in August for Syrians fleeing violence in the country.

Yet three weeks ago, Interior Minister Thomas de Maizière strengthened border security and re-implemented Dublin without telling Merkel - resulting in a row that was settled earlier on Friday when Merkel decided to stand by de Maizière.

It was this kind of about-face that has had the German public in confusion for weeks about the government's policy, indeed a recent poll indicated that 52 percent of Germans are unhappy with the administration's handling of the crisis.

Merkel on the defensive

Despite the negative press, Merkel insisted in her interview on Germany's public broadcaster ZDF that "the federal government has the situation under control." Reminding the public that she is not "the first chancellor that has had to face a struggle," she said the job of the government was now to protect the country's borders and fight the causes of the crisis - causes, she said, which remain "outside Germany."

"I cannot unilaterally define upper limits ... what we in Germany cannot do is simply determine unilaterally who can come and who can't," Merkel said when asked how many refugees would be allowed to stay in Germany.

The ZDF interviewers questioned Merkel on some controversial statements from her government - such as Finance Minister Wolfgang Schäuble's recent comments that an "avalanche" of asylum seekers were coming to the country, and her own declaration that "Dublin is obsolete."

Merkel defended herself by saying that Dublin clearly "wasn't working" as it was supposed to, as many refugees were not staying in the first country they arrived due to leaky borders.

As for Schäuble, Merkel simply said he was "in a class all his own."

Report: refugees have not increased crime rate in Germany

An official report says that the influx of refugees in Germany has not led to increased crime rates. It also examined further crime trends among Germany's growing refugee population. (13.11.2015)

Refugees: boon or bane for the German economy?

While some worry the costs of the refugee crisis could leave an irreparable dent in Germany's state coffers, some economist argue they might just save the economy. But for that to happen, lawmakers must wise up. (13.11.2015)