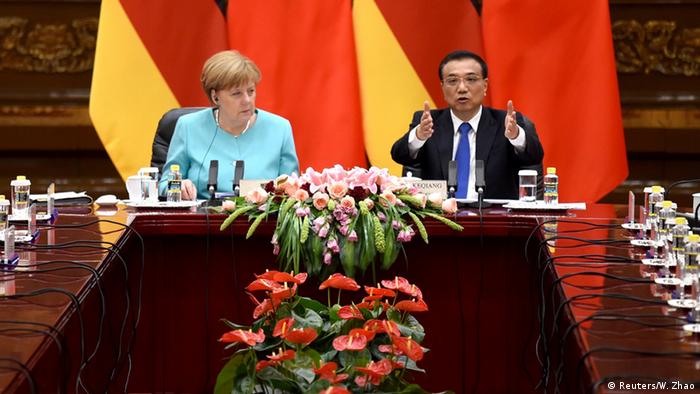 At a news briefing in Beijing on Monday, the German chancellor warned that current discussions about granting China the status of a market economy mustn't be "emotionalized," saying that she was confident a solution could be found "along the lines of what was promised 15 years ago."

Merkel, who began Sino-German government consultations on Sunday, is in favor of giving China that status. But a number of European countries are reluctant to give up the legal defense against cheap Chinese imports.

When China became a member of the World Trade Organization (WTO) in 2001, it accepted a non-market economy status until the end of 2016, making it easier for WTO members to impose anti-dumping duties on Chinese exports.

Dumping occurs if a company is exporting a product to another country at lower price than the normal value of the product to cut out a bigger market share and drive out competition.

But China now says that the WTO accession accord will automatically make it a market economy by the end of 2016 - a position contested by some EU members.

Anger still persists within the 28-nation bloc over Beijing undercutting foreign industries with its heavily subsidized goods, particularly with massive overcapacity in sectors such as steel.

China is easing US access to domestic stocks and bonds and has pledged to curb the flood of its steel on the global market in a two-day dialogue between the two countries - but they didn’t agree on everything. (07.06.2016)

However, China's premier Li Keqiang told the news briefing that unilateral trade protection measures wouldn't help resolve the problem. Low-end steel, he said, wasn't something China wanted to produce or sell and that it was committed to phasing it out.

"China has already fulfilled its obligations on joining the WTO. What's needed now is for the other parties to fulfill the matching obligations they had promised," Li added, warning that China didn't want to "fight a trade war because this will benefit nobody."

In response, Merkel stressed the need for a level playing field for foreign firms amid growing pressure from industry to confront China more forcefully. A number of sectors, including services and construction, accuse Beijing of not following through on its reform promise of allowing foreign companies greater access to its domestic markets.

"Germany has always presented itself as an open investment market," Merkel said. "We expect reciprocity also from the Chinese side."

Li Keqiang promised that the government would take more steps based on "the principle of treating everyone equally, with fairness and transparency."