Angela Merkel spoke in defense of freedom of speech at an awards ceremony to honor a cartoonist whose drawings sparked outrage among Muslims. At the event, Merkel also slammed a planned Koran-burning event. 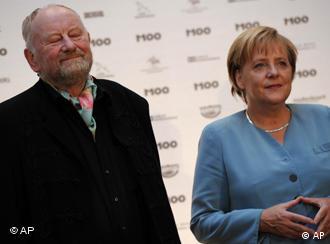 Merkel congratulated Westergaard on his award

Chancellor Angela Merkel used her keynote speech at an awards ceremony Wednesday evening honoring controversial Danish cartoonist Kurt Westergaard to defend freedom of speech. She also took the opportunity to condemn a planned event to burn copies of the Koran as "abhorrent."

Merkel threw her weight behind Westergaard, whose drawings of the Prophet Muhammad concealing a bomb in a turban earned him death threats after they were published in 2005.

"It is about whether or not he can publish his cartoons, yes or no," said Merkel. "Whether they are necessary or helpful or tasteful or not doesn't matter. Is he allowed to do it? Yes, he is." 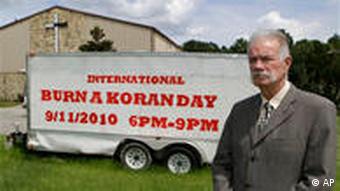 Jones has urged followers to burn copies of the Koran

Merkel made the comments at the M100 Sanssouci Colloquium in Potsdam, where she presented Westergaard with the organization's press award.

According to its website, the 6th annual M100 event brings together the "100 top editors and opinion-makers" from across Europe.

Merkel also condemned a planned Koran-burning event on the ninth anniversary of the September 11th attacks.

"It is plainly disrespectful - even abhorrent. It's simply wrong," Merkel said.

Pastor Terry Jones, whose call to "burn the Koran" has led to fears of global repercussions, worked as missionary for decades in Germany. Here, too, he was known for his extreme convictions. (08.09.2010)

Danish daily Politiken, one of the papers that reprinted contentious cartoons of the Prophet Muhammad originally published in 2005, has apologized to Muslims for causing offense. The move has been widely criticized. (26.02.2010)