House of Swedish ′Muhammad′ cartoonist attacked | Europe| News and current affairs from around the continent | DW | 15.05.2010

The house of the Swedish cartoonist Lars Vilks, who depicted the Prophet Muhammad with the body of a dog, was targeted in an arson attack late on Friday, while Vilks was out. 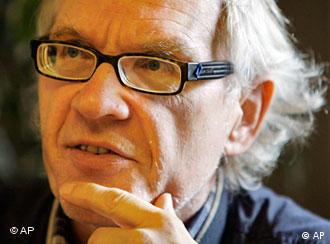 Vilks was not at home when the attack happened

The house of Lars Vilks, who caricatured the Prophet Muhammad for an editorial on free speech in a Swedish newspaper in 2007, was attacked by arsonists, police said on Saturday.

"Probably I can't live there any more," said Vilks, who was not home at the time.

"The damage is rather minor; part of the front is blackened and some windows were broken," Scanie district police spokeswoman Sofie Oesterheim told news agency Agence France-Presse. "The fire went out by itself."

Police found glass bottles containing petrol in the house and are treating the attack as arson.

The incident comes just days after Vilks was beaten while giving a lecture at Uppsala University in Sweden.

Vilks, who depicted the Prophet Muhammad with the body of a dog for Swedish daily Nerikes Allehanda in 2007, has been targeted by Muslim extremists ever since.

Danish cartoonist Kurt Westergaard, who showed Muhammad with a bomb-shaped turban in a Danish newspaper in 2005, has also been subject to attacks by outraged Muslims, who believe any depiction of the prophet is blasphemous.

In January, a Somali man was charged with terrorism and attempted murder for breaking into Westergaard's home.

Westergaard's and Vilks' cartoons have sparked outrage across the Muslim world, with at least 50 people killed in riots in the Middle East, Africa and Asia. There were also formal complaints from Pakistan, Egypt and Iran.

Two of the seven people arrested in Ireland for allegedly planning to murder a Swedish artist, who had drawn the Prophet Mohammed's head attached to a dog's body, have been charged by Irish courts. (16.03.2010)

Several of Sweden's top newspapers republished a political cartoon of the Prophet Muhammad on Wednesday, a day after seven people were arrested in connection with an alleged plot to murder the cartoonist. (11.03.2010)

Danish daily Politiken, one of the papers that reprinted contentious cartoons of the prophet Mohammed originally published in 2005, has apologized to Muslims for causing offense. The move has been widely criticized. (26.02.2010)