Merkel calls for calm as debt crisis spreads | Europe | News and current affairs from around the continent | DW | 17.11.2011

After Greece and Italy, more EU countries are feeling the heat as fresh funds demand higher interest rates. But the German government does not believe the ECB alone can halt the downward spiral. 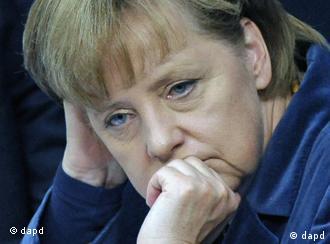 Merkel is determined to fight for changes to the EU treaty

The European debt crisis is gathering steam, as more and more countries struggle to sell new bonds, and if they do, at significantly higher rates. And it does not just apply to Ireland, Portugal, Italy and Greece, but, increasingly, Austria, Spain and France.

The German government admits that it's worried, according to Economy Minister Philipp Rösler, who spoke at a conference organized by the Süddeutsche Zeitung newspaper on Thursday.

Rösler is not surprised though, he said, as the implementation of the measures to tackle the crisis that were agreed at the end of October is stalling and decisions on detailed guidelines for an expanded EFSF rescue fund are still outstanding.

"If you don't have a clear picture of what this alliance looks like, then you can't approach your partners," Rösler said. "Potential investors rightly say that if I don't know what I'm investing in, what I'm becoming a partner in, then I'm out."

But as long as investors don't join in, the rescue fund cannot have the desired stabilizing effect.

No firefighting role for the ECB 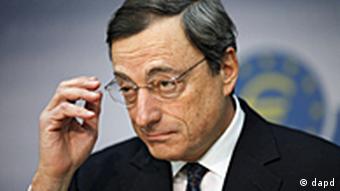 These are the problems Chancellor Merkel mulls over these days too, but she is calm and collected as she speaks to politicians and business leaders at the conference. She tells them she is mainly worried about the breakneck speed at which new solutions are proposed in the eurozone.

"It ranges from the immediate launch of Eurobonds to hastily implemented haircuts to demanding that the ECB finally act as lender of last resort," she said. "I'm convinced that none of these measures, if implemented immediately, will bring about the end of the crisis."

The belief that the ECB will solve the problem of the weak euro is wishful thinking, she believes. The one-fits-all theory would lead to short-term relief on the markets, but it would significantly dent Europe's competitiveness. "We'd settle down somehow eventually, but we wouldn't be in a leading position globally," Merkel said.

In the case of Italy, the question is whether a government made up mainly of technocrats who have not been elected should implement drastic measures, such as a wealth tax, to tackle its debt problem. Politicians like Rösler believe it should, in the hope that the ever faster turning merry-go-round on the financial markets will slow down. The German chancellor calls it "breathlessness" that constantly undermines any political breakthrough.

"If Mr. Monti is tasked with forming a government on Sunday night and then you read on Monday afternoon that the change in government didn't achieve anything - without actually having taken place yet and without it having passed a plan of action - that's when we need to make sure that we're not constantly creating self-fulfilling prophecies that we end up being surprised about," Merkel said at the conference. 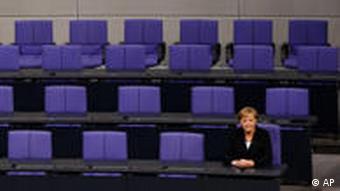 Merkel's demands for changes to the treaty find few supporters

"Those who say, that's not part of the process of tackling the crisis, and the ECB can solve it, and changes to the treaty aren't crucial, and that they can be made sometime in the future when it's all a bit quieter, they are fooling themselves I believe," Merkel said. "We have perhaps different opinions about that in Europe, but my view on that is incredibly firm."

According to Merkel, member states have to be willing to agree to common, binding rules in these areas. "That's the little bit of further integration that is essential to convince the markets that we continue to be in this together. So, this should be the last step in all the efforts we have made so far," she said.

It remains to be seen if Merkel will succeed in her efforts. She does, however, have the full support of Rösler, who has praised Merkel for taking a stand in this crisis. It takes courage, he says, to fight for changes to the treaty when everybody else is against them.

People are always asking for leadership, he said, but they're not happy when one shows it. But Germany was still following the right policy: "In some areas, if you already haven't got any friends, then you don't run the risk of making any more enemies."

Interest rates have jumped sharply for France, Belgium, Austria, Finland and the Netherlands. This has fueled fears that the eurozone's sovereign debt crisis could be about to spread even further. (16.11.2011)

The economist and former EU Commissioner Mario Monti has been chosen to replace Italian Prime Minister Silvio Berlusconi - who has resigned. So what can Italy and the rest of Europe expect? (13.11.2011)