Berlin has signed an anti-spying deal with BlackBerry, allowing the Canadian phone maker to take over Germany's Secusmart. The encryption software maker outfits government phones, including that of Chancellor Merkel. 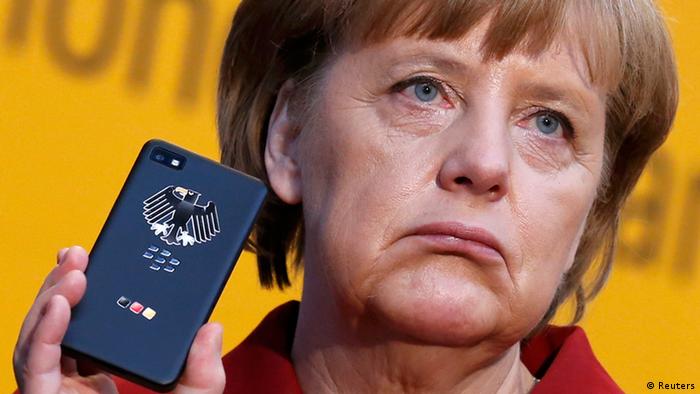 The German Economics Ministry said Friday it had approved of the takeover of German software firm Secusmart by Canadian mobile phone maker BlackBerry.

In a statement the ministry said it had "thoroughly scrutinized" the transaction to see if it violated "essential security concerns."

The German government uses about 2,500 BlackBerry devices outfitted with Secusmart encryption software. The handsets incorporate a Secusmart microSD that acts as a separate hard drive for confidential information which can't be accessed by hackers.

According to German media reports, BlackBerry had accepted far-reaching control powers for the German government in exchange for the Secusmart takeover to go ahead.

BlackBerry reportedly agreed to give Germany's cyber security agency BSI full insight into the source code of BlackBerry's operating system and immediately report security problems to BSI. In addition, the deal included a binding obligation for BlackBerry not to pass on confidential information to foreign intelligence agencies, the German media said.

The German Economics Ministry didn't confirm details of the deal, saying only that a contract had been signed to protect essential "security interests."

In 2013, Germany was scandalized by revelations from the Snowden files that Chancellor Angela Merkel's cell phone had allegedly been tapped by United States' intelligence agency NSA. The takeover of Secusmart by BlackBerry raised concerns among German lawmakers as Canadian officials are known to be working closely together with US-based spy agencies.

Crypto-phones for Merkel and Co.

The German government wants to increase its anti-spying protection. 3,000 crypto-phones have been distributed to the administration so far. The Chancellery and the White House are negotiating "principles among friends." (28.07.2014)

Microsoft Germany wants Cloud services to be regulated at home in a bid to protect data from foreign espionage. The announcement coincides with a new report pointing to NSA activities targeting German telecommunications. (14.09.2014)

According to German news magazine Der Spiegel, the US National Security Agency kept a spy database on more than 100 world leaders. This included 300 files on German Chancellor Angela Merkel. (29.03.2014)